Is football turning into handball?

When Chelsea drew 0-0 with West Ham, Jose Mourinho accused Sam Allardyce for his overly defensive approach and claimed famously that his side played '19th century football.
"It's very difficult to play a football match where only one team wants to play, very difficult.
A match is about two teams playing. This match was only one team playing and another team not.
Pretending injuries, cheating, 10 defenders in the box, defenders not putting a foot outside the box. All very basic."

Jonathan Wilson starts with the words:
"In the beginning there was chaos, and football was without form"
There was no organization and players were all over the pitch, mostly in the attacking third, very few who actually defended. It was all about physicality, because there were no rules until the late 19th century. No offsides, no fouls, no cards, no goalkeeper, you could play with your hands...Football was about pain, brutality and manliness, all about the courage and how brave you are, without that, if it actually came down to skill, any old foreigner might be able to win.
It became more organized when the first laws of the game were made, that didn't allow just to kick the ball high and long and then just chase it. First rule offside was made, which made teams to pass the ball. You couldn't hack players down and kick them, which allowed players to dribble with the ball etc. That ultimately led to formations on the pitch as well and teams started to place players properly on the pitch, which was the 'Pyramid' formation. 1-2-3-5 that was used first in the last 19 century. Basically what those formations say is that the pyramid has been inverted by the time. That means time by time, strikers have moved to midfield and defense. From the original pyramid formation to W-M formation, three at the back, 4 at the back, playing with a lone striker, and ultimately with no strikers at all, which was actually first approved by Totti in his Roma side and the famously my Messi for Barca and Fabregas for Spain. The pyramid has been inverted by the time and it has become from overly offensive to more controlled by possession and space. Teams are more compact and concentrate most (if not all) of their players in a small area of the pitch, usually around their own box and mark zonally. Just like in handball. 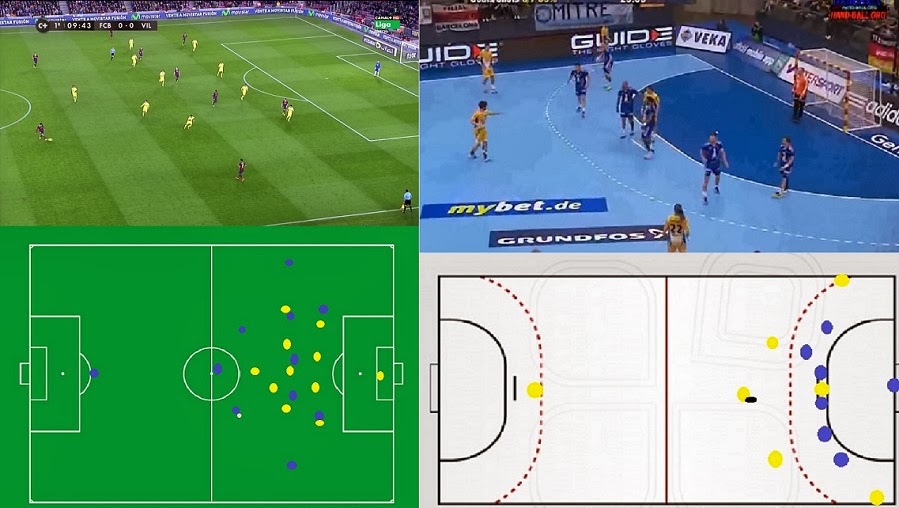 As you can see in the first picture, 90% of the field players are covering perhaps 10% of the total pitch. Villarreal has a pyramid shape, but it's inverted, they have Giovanni Dos Santos as their lone striker, who's actually an attacking midfielder, on top of the pyramid. The gap between defense and midfield is 5-10 meters, about the same between midfield and attack as well. The whole team is built around their own box, mark zonally, to keep it very compact in the middle and leave the flanks open. Every player has its own zone to cover and they man mark only when the man with the ball is coming to their zone, then they put pressure on him.  Football is all about controlling the ball and controlling the space now. While you have the ball, it's very difficult to break the defensive team, you have to be patience and move the ball from side to side to open move the defensive team and open some gaps. Same as in handball. The defensive team is defending around their own box, very compact, no pressure, no leaving your own zone.