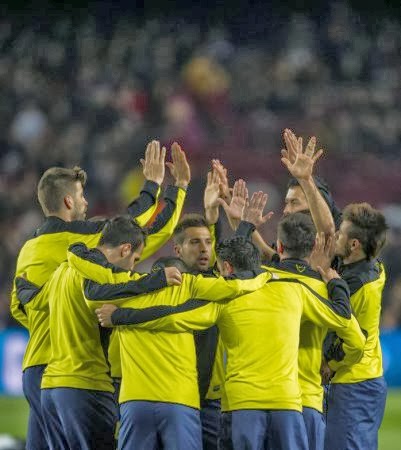 Playing out from the back is something Barca have been missing since Guardiola left Barcelona. He was the one who taught Valdes that he should play with his feet and he said he started to enjoy football again. It's very important for the whole team because that way you can draw the opponent team towards your goal and then you have more space between the lines to play. Also if you break the first line of pressure you break free and could build a good attack with numeral advantage.
Pulled off a fantastic save at 0-0 too, showed once again how important he is for Barca and he will be missed, Cules are a little late with their singing

People always like to take one player from the team to blame him for everything unfairly. I feel Alba has been that one in Barca. He has showed over and over again that he can play together with Alves and can even replace Abidal. He just needs to be the more defensive one out of the two full backs. Just like against Milan last year when Barca won 4-0. Just like against Atleti in supecopa when he didn't let Diego Costa past him. Just like against City in both legs. He is a much better defender than people think of him.

The player who always gets the play when Barca doesn't win. I still wonder why is that. He might have a couple of bad games per season against mostly lesser teams, but throw him a big game and he will show you over and over again that he is still one of the best CB in the world. Real Madrid, Atletico Madrid, City...All the big games this season he has been Barca's top player. Also, he is absolutely vital for defending set pieces which he gets very little credit.

Pretty much the same as Pique. Was by far the best against Valladolid and brought his A game against City as well. People are not happy that Bartra is not starting but this pair is still working so well, one of the top CB pair in Europe, without any doubt.

The thing I've always admired about Iniesta is his mental strength. He was left out in the CL final 2006 after putting some amazing performances that year. He came on in 2nd half after being 1-0 down against Arsenal and the sending off of Lehmann.  Although other players got the credit, I always felt that he was the one who took the game under control which allowed others to shine.

3 years later he was having his best season ever and helped Barca to reach to the CL final (again) Seemed like nothing would stop him start the final this time execpt the injury he picked up 3 weeks before the final. He was fighting against time to get fit just for the final. With the work of Emili Ricart, who was Barcelona's pysio that time, he just got the green light to play the final. The doctors told him not to shoot. Pretty ironic, because he's an attacking midfielder. That didn't stop him run the show against United and win 2-0.
The whole 2009-2010 he was fighting with injuries and that affected Barca to reach their goals that season. When it was time to go to the World Cup in South Africa, he picked up an injury in Spain's first game against Switzerland which they lost 1-0. Looked like the dream of winning the WC was gone but he worked very hard to get fit again, came back vs Chile in last group game and scored the winner. The rest is history.
Before the Valladolid game he had a tragedy in his personal life when his wife miscarried her 2nd child. He didn't travel with the team to Valladolid and Barcelona lost 1-0,one of the worst performances I would say in last 5-6 years. End of an era and doomsday were around the corner. Iniesta came to the rescue once again and pulled a magisterial performance against City.

He is simply one of the best footballers in the history of football.


Barcelona's anchorman in midfield. The most consistent performer in Barca's squad in last 2 or 3 years. He has been struggling a little bit after the Chistmas. He has had very little support defensively in midfield. Also the change of style where Barca defend a lot deeper and a lot longer isn't suiting for him because he has much more space to cover between the lines. Yesterday he did very well, as did the whole team to press City in midfield and also press a lot higher, something they have lost recently. It was a vintage Busquets performance with intelligent covering defensively and good handling with the ball.

Started against City at Etihad, but left on the bench at home, Neymar replaced him that time. Came off the bench in last 20 minutes. He was very much involved in the last goal, his leap is tremendous, he can simply win headers against everyone in the world. He's also a very good creator, played a nice ball to Iniesta who could've finished that off by himself but give it to Alves who scored.

alexis city build up by allasfcb