For me, there are two types of coaches - reactive and proactive.
Those who respond to some unanticipated event only after it occurs and those who are designed to anticipate possible challenges. Those who deal less in creation than destruction and those who deal in ideals not in countering those of others.


That leads us to two major footballing styles, ideologies, philosophies. Whatever you wanna call them.
Reactive teams take defending as their starting point. First priority is not to concede goals and defend as a compact unit. They allow opponent to have possession. Ball movement causes a player to react and move in a certain direction, which in turn affects every other movement and possible option on the pitch from there on in. When the opponent loses the ball, the reactive team try to strike on the counter attack.
Proactive teams take attacking as the starting point and their first priority is to have possession. Their playing style and team organisation is attuned to put opponent under pressure so that they will make defensive mistakes. The goal is to find numerical superiority. To find the free man (3rd man) by moving the ball, positioning, or player movement.

I've always preferred proactive style of football. Xavi has said 'The one who has the ball, is the master of the game' You can always be inventive and be the creator of your own success. Counter attacking football has always been synonymous with reactive football. But in Barcelona's latest game against Athletic Club they did something wonderful and the same time paradoxical. They had possession, but at the same time they played counter attacking football. How is that possible? The answer lies in Ricardo La Volpe.


Building from the back (Salir jugando in spanish) is something Ricardo La Volpe practiced with his teams since 90's, most notably with the Mexico national team in 2006 world cup. In 2005-06 Guardiola played at Dorados de Sinaloa under Juanma Lillo, during a time when the Catalan coach could approach building from the back, salida lavolpiana. He brought that style with him to Barcelona in 2008 and made it famous. Today almost every team in Spain use this, some more, some less.

What made the Athletic game so special was that Ter Stegen made (62) and completed (51) passes. Most from any goalkeeper in a La Liga game since 05/06. And just two of them went past the half way line. 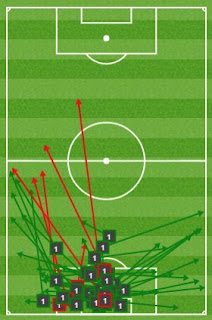 Two proactive teams faced each other. One had the ball and the other wanted the ball. Barcelona knew that Athletic would come at them, pressure really high, force them into making mistakes and try to beat them with their own game. But Barca went one step ahead. Inventive. They had the ball, so they are the masters of the game. What Barca did was that they said come at us, pressure us high, but we are not afraid. We know our technical abilities, we have other plans. We invite you to our own third, which means your defense will be on the half way line. If we can overcome the first and second line of pressure by using those 4 following tactics below, we are through. We have space and time then, just like a counter attacking team would have when they sit deep and start a counter attack as soon as they get the ball.


There was four ways Barcelona played from the back against Athletic and try to break it down.

1) Start from a goal kick.
To start building from the back via goal kick is very difficult and very few teams do it properly. You need all 11 players involved and positioned properly. Playing out from the back implies aggression, crossing the opponents lines in order to advance. Otherwise you end up having defender kick the ball in a U-shape between each other until one of them kicks it long because there's no structure and if there's no structure, you can't move the ball from defense to attack.


When you play from the back and use your goalkeeper to bring the ball forward, you play 11v10 outfield players so you can always find a free man circulating the ball. What Barca does here is they start from very deep, using their center backs and goalkeeper to move the ball from side to side. Athletic tries to pressure Barca to play the ball to the side, where it's easier press (since the sideline is the best defender in the world) But Barca plays it straight back to the other side which unbalance the defensive structure. That leaves one half of their structure on the left still and the other on right and a huge gap in the middle where Busquets is. That allows him time and space to find Arda with a over the top ball behind Athletic's high defensive line. The ball is a tool that is used to eliminate opponents and manipulate their defensive balance. In about 20 seconds, Barca turned being pressured on their own third, to a ball behind Athletic's defensive line, running towards their own goal, with acres of space behind. Just like counter attack would look like.


2) Invite opponent to your own half.

Barca wins a free kick in midfield. Athletic is well structured and have every man behind the ball. They areready to defend deep and it's always difficult to find your way through a compact defense, sitting on their own half, every man behind the ball. Barca start to play the ball back, inviting first players to come out and pressure. Then do it again. Once Umtiti plays it back to Ter Stegen, Athletic sees an the moment to bring their lines higher. The game is now entirely on Barca's half, but they have the ball. Barca, once again, use their 11th man to to find numerical superiority. Once Umtiti is pressure on his own corner, he plays a longer ball to midfield. Now the ball is loose. The defensive structure is loose. Athletic players don't know what to do. Suarez comes deep, center back does not follow him, he has now Messi to cover. The game has changed completely. Just seconds ago Barca were pressured on their corner (which they invited)  and now Athletic has all their players face their own goal, running back, trying to stop the counter attack.

Here Barca again plays the ball back and invites Athletic to come out and pressure high. They force Ter Stegen to play a long ball. This is what they wanted. To force Barca give the ball away. They do for a second but Barca wins the second ball. It's always important to win second balls. Now the structure is messed up again. There's a huge gap in midfield. Rakitic gives the ball to Messi and the counter is on. Both full backs bomb forward, both midfielders bomb forward. Total chaos. When Messi has the ball, at one point, he has 6 teammates and 7 opponents behind the ball. Options everywhere. For him, it's not difficult to find his teammate. The most important thing is that when Ter Stegen was force to play a long ball and the ball was loose, Barca had more players behind the ball than Athletic did. Barca had the option to counter, Athletic did not.


4) Beat the pressure with quick combinations/dribble
Finally, you can beat opponents first line of pressure with quick passing combination or with a dribble, especially at latter stages of the game. This is 80th minute of the game. They are tired but still pressing. Once you get through the first line of pressing, then the game is open and can play the ball behind the defense.


And he's goddamn right. The whole idea of positional play (juego de posicion) is that players pass the ball to each other in close spaces so they can find the 3rd man. Then you can break the lines. And once you do that, the game is open. Barcelona's salir jugando serves a very specific purpose and when they execute it correctly, it's one of the best weapons that they have.