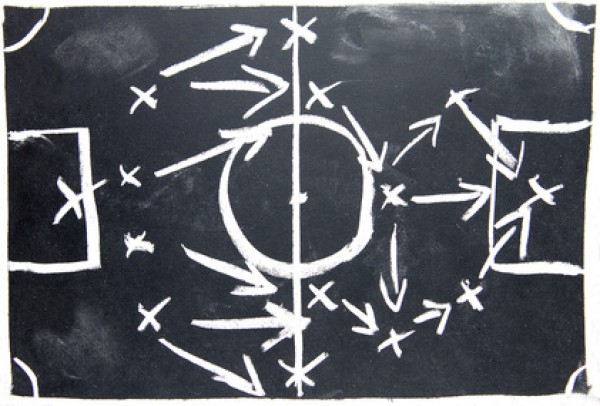 This is not so much of a breaking Barcelona's build up and how they attack, it's just one of the thousands of ways to do. I'm just trying to drag you attention on some of the little things, how the players think and act in certain situations. Wheter you are a player yourself, a fan, a fanatic or whatever - just take the 10-15 minutes to take a look and see some of the things that you might not always see during the game. Players have to make and take hundreds of decisions every game, this is just some of them. Like I always say, the game offers a lot more than just the goals, that you'll see in 'highlights' after games.


It all starts with Adriano's throw in. Depor made it very compact down the left hand side which made it difficult for Barca to create something. They cleared the ball upfront and Nelson Oliveira put pressure on Puyol. One of the thing about Pinto's play and overall these days is that goalkeeper are like sweeper, they really play very far from their goal which is vital because if you look the high line Barcelona keeps. When the ball was kicked up front, Barcelonas defence were 5-6 meters from the half way line. Pinto did really well there, he didn't panic but kept his head cool and looked for a pass instead of hoofing it because of lack of
confidence.

Yesterday, Alves was by far the best player on the pitch and this is one of the reason why. Huge huge confidence and ability to play one-twos and shake off defenders. He has two players running towards him to cut the passing options. He has the option to pass it to Masche and change flanks. Thats what most players/teams would do because it's the ABC. But this is what makes Barca so special, they are always so unpredictable. Alves makes a dummy pass and plays it trough the two Depor players and leaves them dead.


Alexis' part is good because he has his confidence back now and this shows it well. He was surrounded with 3-4 players but he found his way trough. Especially good part was at 0:09 when he didn't play the obvious pass to Alves, but a dummy pass to take off the defender and create space with that. You can see Alves appreciate this and gives him thumbs up.

Busquets came on the picth in the last 15 minutes to give this team more balance in both attacking and defending. Up that point it was still 1-0 to Barca and there was a little panic in the team. He lined up together with Song but it's not double pivot because the never lined horisontaly together, that would make the build up very hard because players need to have distance from themselves to create a passing line and room. This is so important thing to understand. If you want to help your teammates, often the right thing to do is to move away from him, not towards him. Thats something Cruyff or Pep would tell you

Now to get to this particular play here, this is just brilliant. During the time the pass from Alexis is coming towards him, he looked 3! times over his shoulder to look where Pizzi is. He recives the pass with his left foot, which makes Pizzi to close him from the right side, he took all this into account already before and that created the space from the other side, to make a quick change of direction and get past of Pizzi and plays the pass to Iniesta.

"One of the best things that FC Barcelona do is run with the ball to provoke or tease, not to dribble."

Iniesta's part is very similar. Always look over the shoulder to get your bearings. Also moving away to create the passing line and to be able to play 1v1, like Cruyff said in the video. In the end he plays the troughball to Tello who makes a run behind the full back.

This is just a 30 second clip but to break this down you can see how many things happens on the football pitc, how many decisions has to be made, and always keep your mind busy. It's mentally exhausting, isn't it?