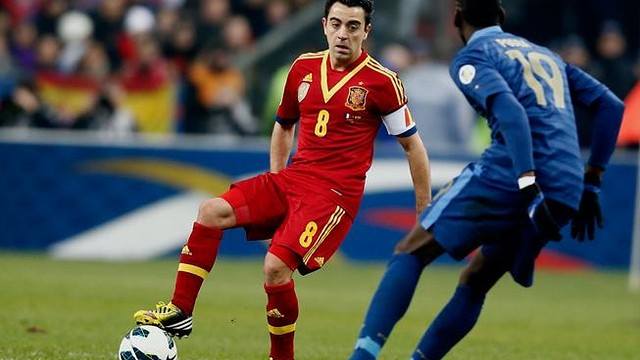 Very much like Barcelona couple of weeks ago agains Milan, Spain were back against the wall yesterday against France. After draw with Finland, they definately needed a win to secure the frist spot in their group to qualify to WC2014 in Brazil. Above all that really amaze me how Barca/Spain play their best football under pressure, take it either way - under pressure when an opponent close them down and need to make right decisions constantly, or under pressre as to get the result when most needed.


The clip above shows Xavi's ability to control the game induvidually as well as Vicente del Bosque got his  gameplan spot on. Although the names and formation were similar to what they had against France in Euro12, when they used also double pivot the shape and dynamics were different. In Euro's they had doublt pivot playing in the same line and when Xavi or/and Iniesta dropped deeper, they were on each others way often which slowed down their build up.
Yesterday on the other hand, they had the same midfield but different shape, they didn't play on the same line, mostly it was Busquets who played as a pivot, the man just ahead of back 4. Then it was Xabi Alsonso who played just ahead of him, as a regista, a deep-lying playmaker, who I think did extremely well, especially finding gaps and playing passes between the lines where Xavi mostly operated. Xavi was they key man. Often he wants to come deep and dictate the play from there, but since Spain already have 2 midfielders there, he has to play ahead of them, as a #10, a trequartista. He found spaces between midfield and attack where he operated and Xabi & Busquets found him with vertical passes.

First you can see that the midfield 3 keeps distance from each others which stretch the game and creates space to opreate in midfield and they don't get on each others way. This time it was Xabi who played as a trequartista and Xavi as regista, but they switched positions at times on the pitch. Most important is that they played vertically ahead of each others.

Now lets get purely to Xavi's role. People often say he has eyes on the back of his head. No, he does not have. What he does is that his head always keeps spinning, constantly, to make sure he knows where he is at and where his opponent is at. He palce his body the way he can see Busquets and he could recive the pass while keeping his body between the ball and Pogba. His body is towards the pass, so to see whats going on behind him he constantly needs to check over his shoulder, whether he could play the pass with one touch, two touch or keep the ball.


Xavi has an extreme ball control, he always feel comfortable in any situations because he has played that way since he was a kid, always in small area, tight situations. One of the best things he does he runs with the ball to tease and provoke you, not just to dribble. With that he can drag defenders towards him and then at the right time he releases the pass.
"He waits for one of us to get close to make the pass" - Rooney


Here he does it again. Pogba restore his position, Xavi gets the ball, waits, tease Pogba towards him to steal the ball and then when he is close enough, he leaves sapce behind and Xavi release the perfect pass to Xabi Alonso.