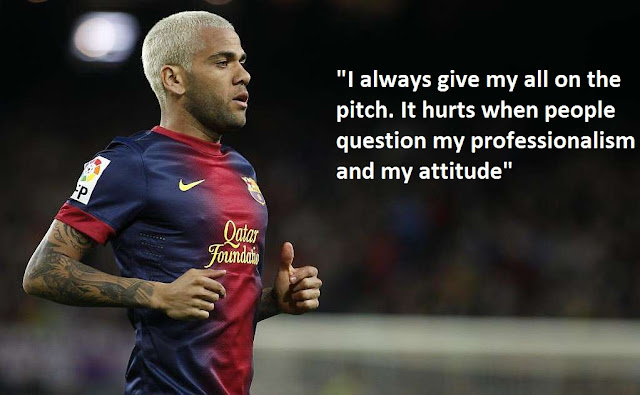 Dani Alves faced a lot of criticism at the beginning of this season. People even went so far to compare him with other Brazilians, who had their moment of glory and are done now, like Ronaldinho after he won the Champions League in 2006 and reached his peak. It was often said also that Montoya is ready to replace him, especially after Dani picked up his fourth season in year 2012 and Montoya replaced him against Levante, which made it 11 La Maisa graduates on the pitch at the same. Due all respect to our La Masia boy, but he'll probably never reach to the Dani Alves' level. It's not that he isn't good enough, but Dani is, was and will be ahead of him.


Injuries were a problem for you in 2012. Do you wish you’d played more?
Yes, of course. It’s almost as if all the injuries I’ve never had in my career have happened to me now. The way I see it, though, it’s not a question of why they’ve happened but what I can take from them. I think I’ve had to go through this to be able to appreciate the things I don’t necessarily see when I’m focusing on my job. It’s been good for me in that I’ve matured and learned things. That’s the way I look at it. When you’re loyal to your work and you’re a model professional, then everything falls back into place. Right now I’m very happy to have started the year playing and I hope I can stay fit and play a part.

Year 2013 has worked perfectly for him. He is motivated more than ever, he is the top assister after winter break, he wants to win. When Iniesta famously said before the Milan second leg that “I'd put my hand on the fire – we'll beat Milan" Dani responded: "If Barcelona lose tonight , I will put my whole body on fire". When the team lacked the fire and pressure the most, Alves stepped up and said that before the game. I always said he was the key man to put this performance against Milan to win 4-0. Above all, it is the pressing game and hunger that has lead Barca to the success in all those years.

Alves said to France Football today:  "I don't agree with those who say that I attack better than I defend. For me, a good defender defends as high as possible."
He raised a good point there, because when people usually think about defending its all about in your own third of the pitch, near your own box. However the Barcelona system, Total Football, allows players to move around the field and thus to also defend higher up the pitch, to make it difficult for the other team to build up their attacks. When you defend so high up the pitch, you are also closer to the goal, while the other team has a long way to your goal. It has a metal advantage, to play on the other half, to make the other team scared of you.

When you look this video against Villarreal you can see from the first clip that he is charging 40 yards up the pitch to close Joan Capdevilla down on, rather than retain his position and let him build up their attack easily.
In the second clip you can see that he plays so far up the pitch, but he also defends so high up the pitch. He makes the whole Villarreal team to defend deep, and when they try to build up, the whole Barcelona team defends as a unit high up the pitch.

This is his main role. But not always. Last season Guardiola used him often as a defender in the 3 man defense and used classic wingers like Cuenca or Tello in the wide position. But he also used him as a defensive full back vs Real Madrid in the Supercopa both legs, where he famously shut down Cristiano Ronaldo. In those games he showed that he is not a liabily in defense, as many people have pointed out earlier and by shutting down C.Ronaldo shows you that he can defend in his the first and middle thrid of the pitch.


Dani Alves is a Brazilian. Brazilains have a reputation of not being always 100% focused and often caught doing something bad off the pitch. Alves has been in the club since 2008, he has won everything and even more. But he still wants to play and win and give everything he has for the club. David Villa said about Alves:
"I remember that I once read that Dani Alves said he'd jump out of a window if Guardiola asked him to. That says it all.

If There's one video in the world that can prove his loyalty and professionalism its this one. It's the last minutes of the El Classico. Many Barcelona players appeal for the penalty and focus on referee instead of the deadly Real Madrid counter attack. But not Dani. He chases back their best counter attacking player for 50-60 meters, like it's the matter of life and death. That proves everything - his loyalty, his professionalism, and that he is a complete defender.