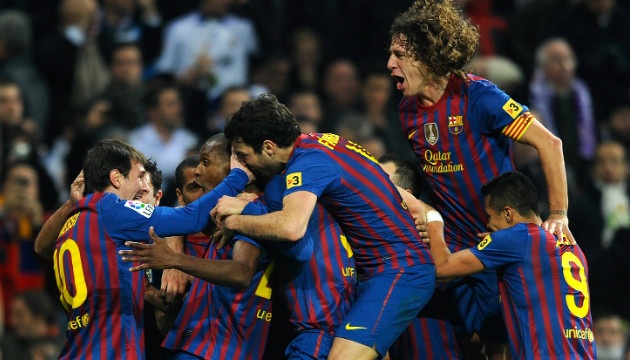 When it comes to great team goals, most of the people have Cambiasso's goal in World Cup 2006 first in their mind. It's been 7 years since this goal! While Barcelona have scored goals like these basically every month, they still remember the Cambiasso goal, because it was scored in the World Cup. I personally think that club football is way better than national team football and it's harder to do this stuff week in week out, but that's maybe another story.

Cesc Fabregas just scored his first hat trick in his career against Mallorca and his first goal came after 27 passes. I just collected some of the greatest team goals Barca have scored in past years. Some of them have 30-40 passes in the build up, some are more quick and lethal. Either way, these goals are piece of art, although usually when they show these goals on TV, they cut it to a certain part and left most of the build up out. Not me. Enjoy these goals, from start to finish, as it suppose to be!

*
Let's start with the Cesc Fabregas' goal vs Mallorca, 27 passes lead to this goal, Alexis at the end with a lovely one-two. Classic stuff.
FC Barcelona 5 Mallorca 0 (Cesc 1-0, assist Alexis)


*
A beautiful team goal, 31 passes before the goal. Alves the producer, Messi with the finish.
Malaga 2 Barcelona 4 (Messi 2-4, Assist Alves)


*
Barcelona struggled to get through the Celtic's defense, they were behind until the magic triangle of Messi-Xavi-Iniesta produced a moment of magic at the end of the first half.
FC Barcelona 2 Celtic 1 (Iniesta 1-1, Assist Xavi)

*
Iniesta and Messi produced a fantastic combination by playing a double one-two to get past defense.
FC Barcelona 2 Viktoria Plzen 0 (Iniesta 1-0, assist Messi)


*
Messi didn't play this game, but this didn't stop Barcelona to produce one of the most beautiful performances of 2009/10 season. The goal is just a good example of this.
FC Barcelona 2 Inter Milan 0 (Pedro 2-0, Assist Alves)


*
One of Barcelona's best games of 2011/12 season, first time they played their all 5 midfielders together - Cesc, Thiago, Xavi, Iniesta and Busquets.
FC Barcelona 4 Santos 0 (Cesc 3-0)


*
Messi does the hardest thing in football, he made this goal look so easy. He passed his way trough of Panathinaikos' defense.
FC Barcelona 5 Panathinaikos 1 (Messi 3-1, assist Pedro)

*
Malaga equalized near the end of this game after Xavi played Malaga striker onside. But the revenge was sweet. Couple of minutes later he produced one of the best defense-splitting passes I've ever seen!
FC Barcelona 2 Malaga 1 (Messi 2-1, Assist Alves, Pass Xavi)

*
The last league game of 2009/10 season, Barcelona already had 96 points but that wasn't enough. They needed to beat Valladolid to claim the league title and they did it with style. 99 point was the record points in Spanish league history, until Real Madrid broke this last season.
FC Barcelona 4 Valladolid 0 (Pedro 2-0, assist Messi)


*
Another great goal from this game. With that goal, Messi tied with Ronaldo's club record of 34 goals in a single league season.
FC Barcelona 4 Valladolid 0 (Messi 4-0, assist Yaya Toure)


*
The more I see this goal the more I start to think that this is the best goal I've ever seen. It just had everything.
FC Barcelona 4 AC Milan 0 (Messi 1-0, assist Xavi)


*
This game was tactically on of the most amazing games I've seen. Barcelona re-inverted the pyramid
Barcelona 4 Getafe 0 (Alexis 3-0, assist Cuenca)

*
An exhibition game between Barcelona and Osasuna. It was just too easy for Barcelona. Great understanding between Xavi and Messi, great movement.
FC Barcelona 8 Osasuna 0 (Xavi 6-0 assist Messi
xavi osasuna by allasfcb


*
One of the most ultimate team goals out here, 37 passes lead to Bojan's goal, every player touched the ball in the build up
Barcelona 2 Almeria 0 (Bojan 2-0, assist Alves)


*
Barcelona started the second half and scored the goal without letting Sociedad even touch the ball! Messi & Alves played 3 one-twos in the build up! Amazing goal.
Barcelona 5 Real Sociedad 0 (Messi 3-0, Assist Alves)


*
This goal is all about Victor Valdes. When Guardiola arrived to Barcelona, he started to teach Valdes so aspect about the game he never knew before. He was a totally different player than he was before. He was very confident and trusted Guardiola 100% who wanted him to play in a certain way. It was a risky way, but if you can see this big picture, you get the point. A lot of Barcelona attacks and goals started with Valdes and this is one of the best examples of how important Valdes is to the team
Barcelona 1 Real Madrid 1 (Pedro 1-0, assist Iniesta)
I also think that this picture describes it very well, one of my favorite picture as well.


*
Even the dirty tactics of making the grass as long as possible doesn't keep Barcelona from moving the ball around. Maybe not so fast, but still managed to put around 30 passes together before the goal.
Zaragoza 2 FC Barcelona 4 (Pedro 2-4, assist Messi)

*
Another goal from the same game. Barcelona almost humiliated Real Madrid. Both the pressing and the passing were out of this world in this game. As many Barcelona players said it was the best game they ever played.
FC Barcelona 5 Real Madrid 0 (Pedro 2-0, assist Villa)


*
Barcelona won the first leg at Camp Nou with a stunning (first half) performance and won by 4-0. It was truly a football masterpiece. But the best team goal game in the second leg.
Bayern 1 Barcelona 1 (Keita 1-1, assist Xavi)


*
Although its just a pre season friendly, I couldn't find any goal with more passes in the build up. In this goal Barcelona managed to put 42 passes together before David Villa scored. Ironicly this was their only goal and they lost the game by 1-4.
Chivas 4 FC Barcelona 1 (David Villa 0-1, assist Pique)
(PS! this goal was not offside, the left back played him onside. bad defending)

*
Arsenal didn't have a single shot in this game, but still Barcelona were in edge and almost were knocked out by Arsenal, Mascherano had to make an amazing tackle in the last minutes. This goal is well played by Iniesta. If you want to have fun, have a look on Messi during the whole clip ; )
FC Barcelona 3 Arsenal 1 (Xavi 2-1, assist Villa)

*
Last but not least. This is the most important one because this shows that the future is bright. Barcelona already had advanced to the knock out stage in 2011/12 season in the Champions League and in the last group game, Guardiola basically line up all the youngsters. Barcelona totally dominated the game, like their first team. All the goals were very well played out.
FC Barcelona 4 BATE 0