First of all I want to say it's really hard to analyze when the camera don't show the whole field, but a certain part of it. But I do my best with what I got.

First of all lets start with Zaragoza. They played with a 4-4-1-1 or 4-2-3-1 formation, basically like most of the teams today plays; back 4 is compact, another block of 4 ahead of them and 2 attacking players, one slightly ahead of another.

Barcelona on the other hand played with their standard 4-3-3 with false 9. What they do in possession is that the full back(s) provide the width, they stretch the game, that allows the wingers to come inside.

If you look at this picture, Alves has 8 field players playing behind him, Only Tello who played at LW is ahead of him. Alexis, Bartra and Xavi cover his space there, which allows Dani Alves to play 10-20 meters further up the pitch. 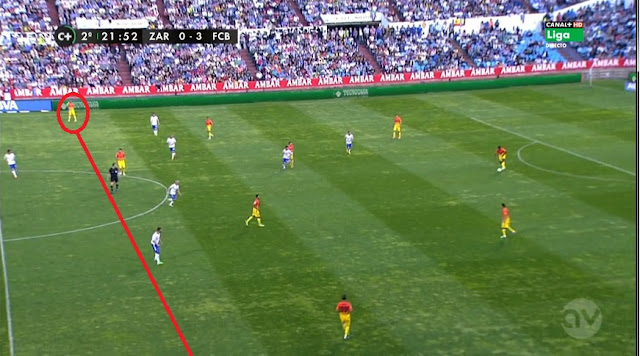 alves alexis by allasfcb This part is very important in Barcelona's build ups. Barcelona moved the ball from side to side and just when Montoya plays the ball in the middle, it comes all down to the timing of the runs. This is something Alves does so well, he reads the game very well. Just before Xavi is reaching the ball in the middle, he already starts with his run behind Zaragoza's defense. 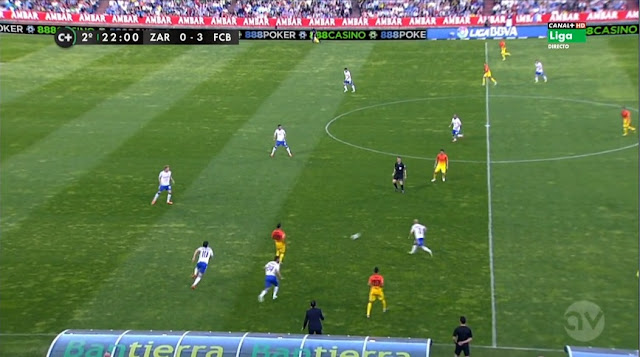 This might now sound surprising but his forward run he also defends. How? Because with his run, he also drags the Zaragoza's midfield towards their own goal. Look at the Zaragoza left midfielder pointing with his hand towards Alves, he can't cope with him, while the back 4 stayed compact towards the right side where the ball was a couple of seconds ago. Also the cross movement with Alexis, when Alexis comes inside and allows Alves to overlap. 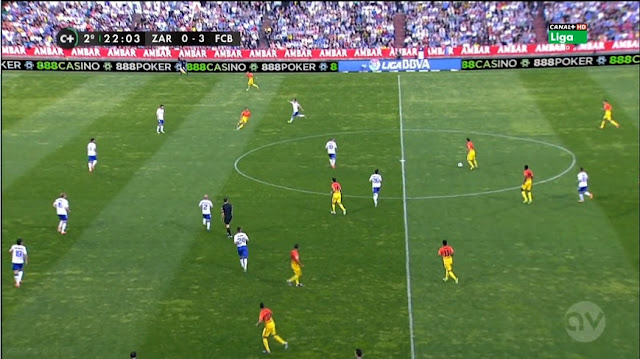 defence shape by allasfcb
After Dani's cross to Tello he stayed up front and the team created a 3 man defense, with Song dropping back between the two CB's (Adriano, Song, Bartra) This created solidity in defense and Bartra moved far right to cover Dani's position. This defensive shape allowed Alves to stay up the field without worrying too much about his position in defense. It also allowed Alexis Sanchez to move into central position. 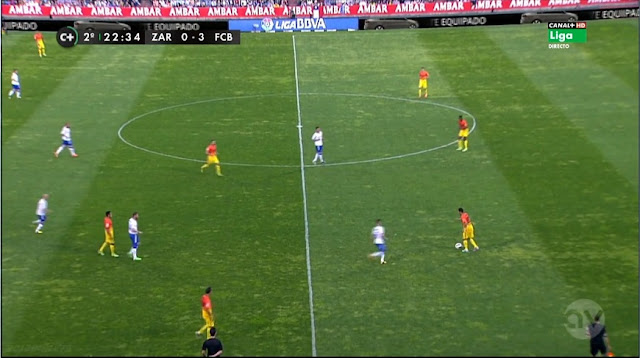 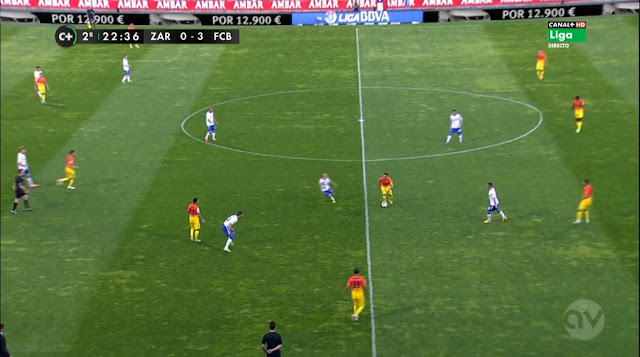 This defensive shape looks like any other defense in the world. Bartra as RB, Song+Adriano CB and Montoya LB. But it's not. It's actually a defensive movement which allows Alves to stay up front. It's basically a false defense. It's the movement Guardiola started against Sevilla couple of years ago that allows Alves to act as a wing-back in the build up's without leaving his space exposed. 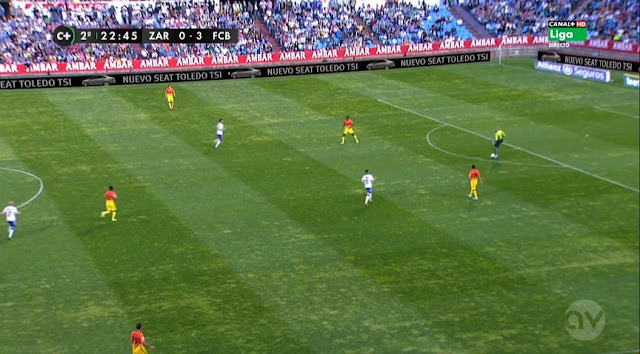 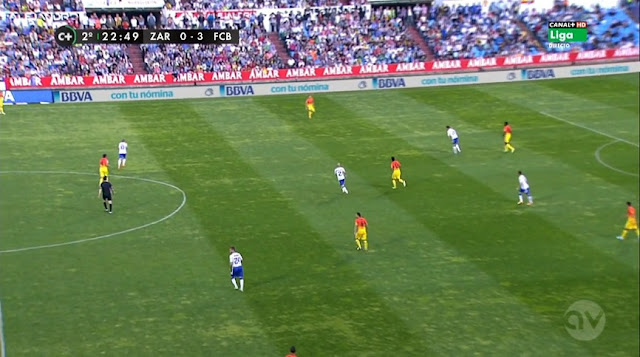 Conclusion.
Everybody knows that you have you use all the potential that a player offers to you. Alves adds another dimension to Barcelona's shape. He is so fit that he could run up and down the right flank, but that doesn't mean he leaves space behind him to expose. Barcelona is so clever that fill this space behind him with a clever movement, that allows Alves to play at times very high up the field. So he becomes the player who stretches the pitch and allows RW to move into central position, that is often not occupied with a false 9 that comes deep and leaves the back 4 often with nobody to cover.
Postitaja: allasFCB kell Monday, April 15, 2013