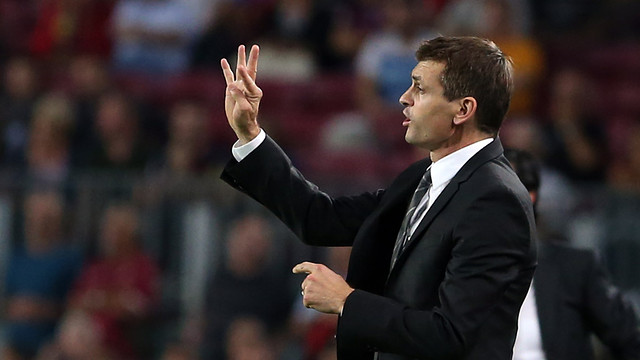 In three of those games Barca were behind one goal in the last minutes, against Granada it was goalless. When we think of last season with Pep Guardiola it was mostly when Barca lost or drew those games because they didn't seem to find an answer, especially in tough away games like Sociedad, Getafe, Valencia, Athletic...

This season with Tito they seemed to find very clever answers to turn these games around in their favor. He had huge expectations when he took over Guardiola, but he showed that he can handle the pressure. It also shows how huge loss Tito was when he treated his cancer in US and was away for the team couple of months when they struggled to find those solutions.

Last season Barcelona relied on Messi in those situations too much, everything went through him. What Tito did was that he put Messi in midfield and a proper #9 ahead of him, either Villa or Alexis, to occupy the back 4. It worked almost every time, because the #9 did often take the defenders away from Messi to create space for him in those tight situations. It also gave him another passing option to him further up the field. 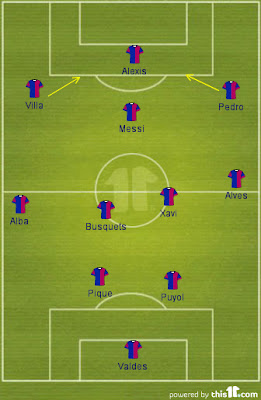 Barcelona went behind after 17 minutes and they were behind 0-1, until Tito took off Cesc and replaced him with Pedro and 5 minutes later he took off Iniesta who had one of his worst games and replaced him with Xavi. Villa came 5 on after 70 minutes for Tello. So that means Barcelona went over to 4-2-3-1 formation, Alexis playing as a #9, Messi behind him. Right after that change, Barcelona scored and it's a clear example why this worked so well. Messi had 3 options to play the ball in front of him, which rarely happens when he plays as a false 9. On second goal you can see the importance of Alexis and the importance of #9 in the team. His clever run and his presence took off 2 defenders from Messi and he had a clear shot and made it 1-2 to Barcelona.
osasuna first 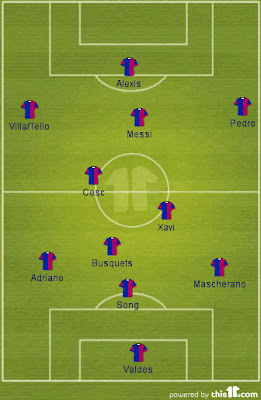 This game was against Spartak, or should I say Unai Emery, who is an extremely good and well respected Spanish tactician. Although his teams have never won against Barcelona, he has always given a good fight and known for good open games, with immense pressure high up the field.

After an hour, Spartak was leading 1-2 and Barca needed to change something. Tito made a huge change by taking off Dani Alves and replaced him with Alexis who played as a #9 That meant the whole system needed to be rebuilt.

Barcelona went over to 3-3-4 system. Adriano-Song-Mascherano in defense, Busquets just ahead of them to protect it. Xavi and Cesc in midfield, with Cesc often making runs into the box. And the 4-man attack with Alexis as a reference, Messi playing behind him and Villa/Tello & Pedro as inside wingers.

Spartak played very deep the last 20 minutes, so Barcelona needed as many players playing in the box as possible to make things happen. 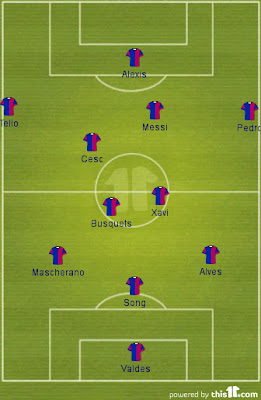 Perhaps Barcelona underestimated a little bit Granada here - they proved to be a very hard team to break down. It took Barcelona almost 90 minutes to score, although I have to say that the Granada goalkeeper Tono had 'one of those nights' That every keeper seem to have once or twice in their career.

If there's one thing that Tito has improved a lot when we compare him with Guardiola - It's the use of substitutions. Guardiola often used his subs very late in the game and usually didn't even use all three of them. Tito on the other hand has been spot on almost every time with his subs. He replaced Pedro with Villa, then he brought Xavi to take the game under control and finally Tello on the left wing to replace LB Adriano. That changed the whole dynamics of the game and Barcelona went all in. Once again he used Alexis as a #9 who is very very good in this role, because he is very active there and moves well, creates for himself and also for teammates. He is an extremely good link up player. Tello and Pedro kept the game stretched and that allowed Messi, Cesc and co to make runs behind the defense. 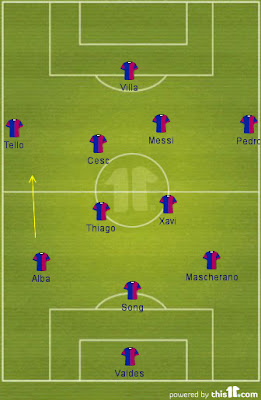 A very very intense game. Like they always are at Ramón Sánchez-Pizjuán. When Negredo made it 2-0 minutes after the second half, the stadium almost exploded. Barca were in a very difficult situation, but not mission impossible. This game was a huge turning point for Cesc, who really seemed to struggle after his good first half of 11/12 season, especially with scoring goals. He scored 2 and you can see his relief in his celebration after 2nd goal.

While being still down 2-1 after 70 minutes, Tito made 3 changes in less than 10 minutes. The end result? One of the most attack minded teams I've ever seen and an amazing comeback in the last 5 minutes thanks to Cesc, Messi and Villa.

But it's Thiago who deserves a HUGE credit here. He injured his leg in the last minutes and all the three subs were already made and he had to carry on. And he played a huge part in the  second goal, although he limped the last 5 minutes of the game.