Barcelona's two sides of the coin 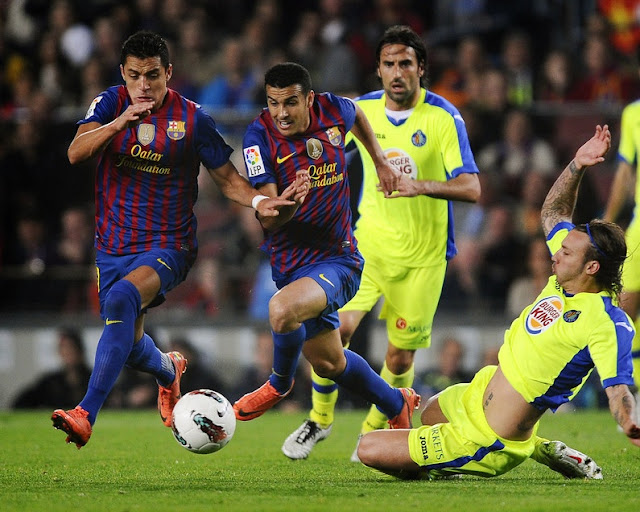 Barcelona started this game with Messi as a false 9 and Alexis & Pedro on the wings. Mainly because their defensive abilities, to track back and help the defense, especially to cover Robben & Ribery. This is something that only those two in this team can provide and that probably why Tito started with them. Neither Tello, Villa, Iniesta or anybody else could track back like those two, to help out the defense. That was especially needed also because Messi wasn't fit and they needed to help him too with defending. It was almost Those 2 had to do the work of 3 in defending. Both Alexis and Pedro do the job very well, but they don't do the pressing they used to in couple of years ago, that was their trademark pressing with the whole team. They lack the support from midfield at the moment, especially from Xavi, Iniesta & Messi.

While on the other hand, this system with false 9 and two wingers does rely heavily on Messi, say whatever you want, because he is the playmaker and the finisher, he makes things happen. But he also needs fit and hungry players alongside him, who could make deep runs behind the defense. Yesterday we saw one through ball behind the defense from Messi to Alba in the first half and second from Xavi to Alves in the second half. That was it! No runs from Xavi, Iniesta or Messi. I think this picture illustrates it perfectly: 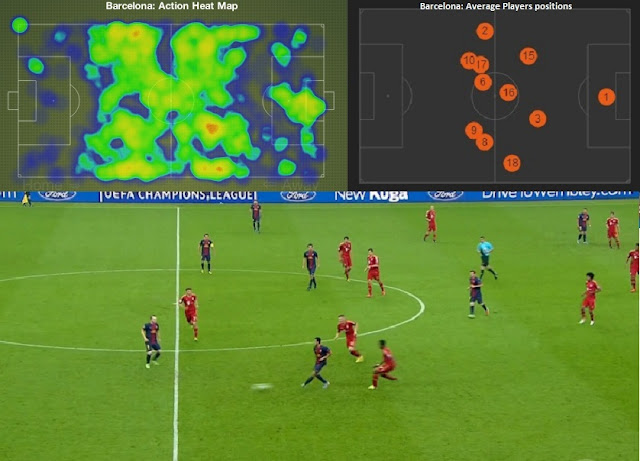 When you have so many players playing on the same line horizontally, you need to have some movements and runs behind the defense. Barcelona didn't have that vs Bayern, maybe it was fitness issue, maybe something else, don't know. But I know when Barcelona is at it's best they are very clever and sharp with their movements in the final third.  As you can see from the heat map, the final third is basically empty, because nothing happened there. Usually it's Messi's area in this formation, but he didn't affect the game much and so it was easy for Bayern to defend. They made it compact in midfield and forced Barcelona to play back passes, while the back 4 had rarely to cover anybody, because there was no runs.
As for Alexis and Pedro, this is the other side of the coin. They are brilliant with their defensive work, probably the best 2 defenders yesterday were the 2 wingers. But they had almost zero impact on the attack. It's not that they can't do that. They can with their national teams. Pedro has scored more goals with Spain this season than he has with Barca, I think this is pretty telling fact. Alexis plays as a striker/false 9 with Chile and he is the focal point of their attack. But then again when you move either of them in the middle, which could possibly suit them better, especially for Alexism and would add another dimension for the whole team in attack. But then again you would lose another defender, and since teams play from Barcelona's wings, it would leave the full backs wide open. That's the other side of the coin in this formation.


Are there any flaws in Barca's game? Yes. Do they need to improve? Yes. Is this end of the era and all the heavy criticism justified that they have received? Absolutely no. Let's not forget that there have been some bigger problems in this season than just losing or winning games. When you have your coach fighting with cancer and Abidal fighting for his life you need to bite your tongue a little bit and be more careful with your criticism. They are still the top team of the world. It's not like they took the League championship back from Madrid and got to the 6th successive Champions League semi finals....oh wait.