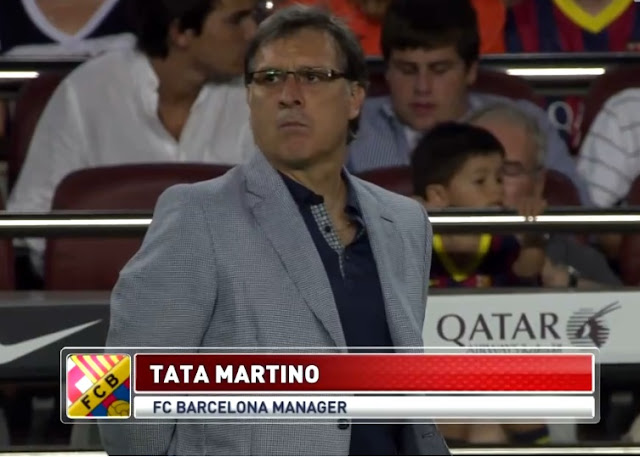 It's the beginning of the season, Barca's third game, first at Camp Nou with Gerard 'Tata' Martino in charge, who we all know is Marcelo Bielsa's student, just like Pep was.  Bielsa is known of course as 'El Loco' which is 'the Crazy One' but they share the same basic football ideas and philosophy, which is to dominate possession and pressure the opponent team very high up the pitch. Bielsa is also known for his man marking system , Martino on the other hand seems to be more pragmatic and not so idealistic. He showed with Paraguay that he could adapt to other styles too and adapt within the game.

In yesterday's game, I found that people are too quick to say (stupid) things like 'Tiki-Tata' or the team seems to press more and play this or that. Well, it's the beginning of the season, first game with Tata in charge and every player want to show his worth to the team and show their potential to get more minutes in the future. Of course they run more to impress him, we even saw that from Messi yesterday. It's still too early to say things like that, we'll have to wait until the end of the season to see whether he can really bring back the pressing game that they had 2009-2011. That also requires some good rotation,  resting Xavi for big games etc.

One thing, that I really was afraid of that, I thought he might bring to Barca is the man-marking in corners, which has been his style. Barca have used always zonal marking since Pep came in 2008. People say that Barca is not good at defending corners any way, but really look back how many goals Barca have actually conceded from corners over the years. I don't have the statistics right now, but I'm almost certain it hasn't been as bad as people often make it. They made the most out of the team that is mostly under 1.70m (5'7'')
They conceded more goals in the last few seasons because of the many injuries they had in defence, not because of the system.


The reasons why I think zonal marking fits better for Barca:

* Barca is one of the shortest team in Europe, they would get easily beaten 1v1 in the air. In zonal marking yopu put your best headers  in danger zones to clear the first danger and weakest men around the area to clear the balls around the danger area
* Nobody covering the posts, thus when the ball is cleared, they can run straight towards and play offside. Also when the striker knocks the ball forward, they can play him offside.
* To deal with the knock downs and second balls, you always have the advantage in players to clear the drop ball.
* Can't drag or block anybody off his position, which Barcelona often uses. This is what Barca used vs Real Madrid for example. Or Puyol vs Germany. There are many examples.
* Collective responsibility. There is simply nobody to blame, it's better for team unity.


In the Joan Gamper trophy game yesterday vs Santos, Martino was for the first time in charge of FC Barcelona and he used man marking in corners. Now this is something like 'under Tata the team seems to press more' or something. This is pretty black and white. This is the first and only major thing I noticed he has changed for Barca's usual style. Of course we will have to wait and see how this works out against stronger team (no offence Santos fans) in the coming season. Cules like to point fingers on their players and now it's the perfect chance to them to find somebody to blame in the goals. For example Adriano already showed signs of misconcentration yesterday when he lost his marker.(See in the video 0:20-0:26) If Tata sticks with this style, he will have to do a lot of work to integrate the new style to this team that they have used for so long. Also have to make good homework for every game to get information about opponents best strikers of the ball and which player marks which player.

* Personal responsibility
* Have to focus on the ball and on the player at the same time
* Could be dragged off position, blocked etc and thus leave his man or play the team onside.
* Barca have a short team and will have major troubles defending 1v1 against bigger players.
* New system to learn and play that well.