How to build from the back 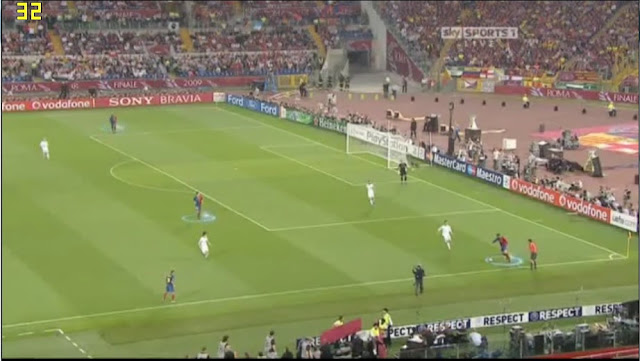 Building from the back, using goalkeeper as a field player to start attacks from the back with short passes...There are two things that really frustrate me about this thing that makes me write about it.
First it's that people think that it's Barca's and only Barca's style. And second that people don't know what that actually means, not to mention how to play it properly.

Let's start with the first one. Building from the back has never been Barca style and if you think of Cruyff's teams in 70's or in 90's it even could not have been because there was a certain rule that made it impossible and even nonsense. The back pass rule. Before 2000's you had the chance to play back pass to your keeper with your feet and he could pick it up. So there was no point to press high and teams didn't even bother making it difficult building from the back. But since 2000's when the rule changed that you can only pass the ball to your keeper with your head/chest it changed. And the first manager that introduced it was Mexico's manager Ricardo La Volpe in 2006. In Spanish it's called Salir Jugando
Although it's true that Guardio Bring this style to Barcelona, this style still can't be called 100% 'Barca style'
When Guardiola retired as a Barca player in 2001, he went to play in Italy, Qatar and Mexico.
In 2006, when Juan Manuel Lillo was appointed manager of Mexican club Dorados de Sinaloa, he recruited Guardiola to play for the club, while he was in managing school in Axocopán, Atlixco, Puebla. He subsequently played for six months, before retiring definitively. At that time he already took simuntanously with his coaching courses and met key figures in coaching world including Bielsa, Menotti, Cruyff, Lillo, La Volpe and many other and he learned something from all of them. From La Volpe he learned building from the back and he is obsessed with this style now, even with Bayern The most important thing in this style is to have a 'modern day' goalkeeper.
That means a goalkeeper who is comfortable with his feet and can play with the ball. It's proven that today the goalkeepers make more touches with their feet than with their hands and they are not just there to stop balls going into the net but also they are the 11th player, he could add another dimension to the team. Victor Valdes is a good example. Before Guardiola took over Barcelona Valdes said that he had no clue about the tactics and told that his job was always just to stop balls and make saves. Guardiola told him to play in a certain way with the team and he almost rediscovered himself and started to enjoy the game again. He is also a good example of that this style might be risky and always anti goalkeepers, because every mistake you make is so obvious and the whole world sees that. A striker can miss 5 sitters in one game, score one and be the hero, while goalkeeper can make 5 saves and one mistake and be the flop and villain.
When you want to play this style you have to believe in this 100% and not change it no matter what.
It's the only way you can play this style and succeed.

Now let's go to the second part. How to play it and why. What made Guardiola so special is that he never told his players what to do. He told them what to do and, explained them why and involved them

When I play football myself or watch it in amateur or professional level I can still see that players/managers don't know what that actually means. What they usually don't understand is that playing from the back involves 11 players, not 2 or 3. This is the most common misunderstanding. It's not just playing a pass to your defender and then wonder what's next. That usually leads to a long ball forward and the whole idea of building from the back loses it's idea. 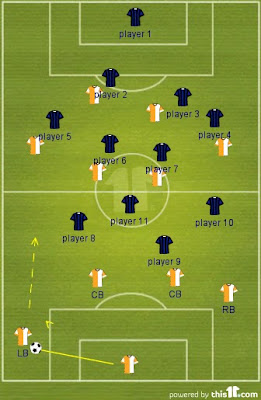 This is how most teams usually play from the back. Full back comes deep to collect the ball, the starts to run with the ball, takes 5-6 touches, everybody else stays static, can't find anybody to pass and ends up with a long ball forward. This is what I call anti salir jugando. It's symbolizes everything it's wrong about the style. It has no point, because the goalkeeper could hit the long ball too, no need to play it short. The idea is to keep the ball, even under pressure. If the opponent press high, you can use the space behind by breaking the first line of pressure, or it they don't pressure high, you can simply keep the ball and start your attack.


So what exactly is building from the back and how to play it? The whole idea of this is the keep the ball. Because as we know the one who has the ball, is the master of the game and can dictate the game. 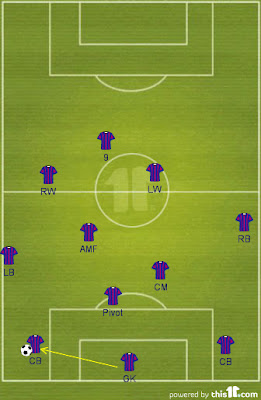 This is an example how to start building from the back via a goal kick. First to actually play it right you need your 2 center backs to split and play 5-10 meters from the touchline, push your full backs forward and bring a midfielder near the 16 yard  box. One of the most important thing in football nowadays is to find space and to use it. The space behind 16 yard box is basically yours, it's your zone and you can use it by moving your two central defenders there. Goalkeeper can play a safe pass to either of his CB's and the according to the pressure decide what to do next. If the pressure if low intensity you can keep the ball easily and start moving forward. If the pressing is with high intensity, you can use the goalkeeper again and/or find your midfield or your full backs. Playing a semi long ball to your full backs is a safe option because it's far from the danger zone and they are not usually under pressure.

Here is an example of Barca in the Champions League final 2009. People used to think that being brave mean playing hard and give always 100%. But being brave could also mean splitting your 2 defenders 50 meters to play the ball from the back in a CL final. Gary Neville explains it very well in his video analysis how this tactics could turn in favor of you and against the other team in 90 minutes. You basically tire the striker by running circles and at the end they are so tired of running so the last minutes belongs to you.

Gary Neville-u0027s Analysis of the Clasico...

Buidling from the back can be divided into three parts
1) Low intensity pressing. You can play easily the short goal kick and start your attack

2) Medium intensity pressing. The opponent press your defense but in 60-70% force, they put pressure on you but if they can't take the ball right away, they drop deeper and play zonal defense to cut the main passing lines and play compact.

3) High intensity pressing. When the opponent team puts very high pressure on your team and push you really hard and make it very difficult. They put half of their team forward to win the pall back high up the field but leave defense vunreable so if you can cut the first line of pressing you can have an advantage in the other half and play can have superiority in numbers. This is why Thiago was brought in to Bayern to do.


There is one last thing I want to point out. I mentioned earlier that football is about spaces. Finding them, exploiting them, use them...and also create passing angles. Because even a good passer is nothing without his teammates. That's what Xavi always says. He needs players to move and help him to create passing angles and make themselves available. When Mascherano came to Barcelona from Liverpool he always though that the best way to help your teammates is to move towards them. But in Barca Pep taught him to do the opposite, to move away from them to create a better passing line. This is the most important in defense because you have to most space in your own half when you have to ball so you need to use it. Just watch and enjoy how Abidal sprints, like his life depends on it, to create that passing opportunity to Valdes.


I Hope this helps you to understand the style a little bit more. And I want you to notice these little things when you watch football, especially in an amateur level how wrongly the teams actually play and how it should be actually done. And if you think, rightfully so, that I only use Barca videos here and it's very difficult style to use and only top top teams can do that then I prove you wrong. You just need self belief and confidence to do that. If a Segunda B team can do this against Barcelona then I can't see why anybody else couldn't do that.

"I can accept failure, everyone fails at something. But I can't accept not trying." - Michael Jordan