First competitive game under Gerardo Martino, FC Barcelona 7 - Levante 0
A lot of positives, some negative things and some question marks.

1. Pressing high up the field is back! It was one of the key things in Barcelona's success, especially in 2010-2011 when Pedro, Messi & Villa worked really hard for the team and put early pressure right after they lost the ball high up the field. In that season, besides Alves, it was the strikers who made the most fouls, that tells a lot about Barcelona's philosophy and how they are defending. Guardiola told to the team that they must get the ball back with 6 seconds and if not then start to defend deeper. Although it is just the first game, it's almost certain Tata wants to bring it back

Martino: "How to improve? We can be more intense and press for a longer time. We can have more options in attack and know when to use them.

2. Messi pressing high and intense. Last 1-2 seasons Messi was given free role, his job was to score goals and be involved when they had the ball and rest when they didn't. That means Barca had to defend with 10 men and the wingers (Alexis, Pedro, Tello) had to work extra hard just to work for Messi and their game with the ball suffered because of that. That clip of Alexis Sanchez last season vs Granada  is very telling. While Messi is resting, Alexis had to work really hard defensively, then make a burst forward and then receive the pass and make an attempt on goal but at that time he was already so exhausted and it really had a huge impact on his game, just like Pedro, they struggled to make an impact and missed a lot of sitters.
This season we have already seen that Messi works a lot harder for the team and that gives a lot more freedom to the wingers who have already scored many goals with an ease this season and have been involved in many goals.
Barcelona's third goal yesterday is a clear example of Messi working hard in final third to put pressure on defense and make them suffer
(0:35 in the vid)

3) Verticalidad (Verticality)
This is Bielsa’s theory of verticalidad, verticality - the system demands that at all moments a player is presented with “three vertical passing options” in order for the team to use fast short passes to quickly transition the play from defense to attack. That means Barcelona have to move the ball much more quicker and with purpose not just the sake of possession that they seemed to obsessed with at times. This is bascially the plan b that everybody is talking about. You don't need crosses and tall strikers to put them home. You need quick vertical passes and quick transition from defense to attack. Luckily for Barcelona they have the players to do that. You need 3-4 different vertical lines to do that. 1)Valdes in the goal is one of the best keepers with his feet and can start the attacks from deep.  Pique is the defender who feels most comfortable bringing the ball up from defense as can Mascherano. 2) But it will be Busquets who would be the key man in this style. In last 1-2 he has improved a lot his vertical play and he feels very comfortable finding passes between the lines mostly where 3) Iniesta, Messi and hopefully Cesc & Xavi will operate. And their job is to find the final killerball that leads to the goal to find 4) either the wingers, or runs from deep that you would expect from midfielders such as Sergi Roberto, Cesc, Xavi...
Last season one of main Barca's problem was that they didn't have lines between themselves and 6-7 players were packed in midfield, Messi dropped deep, Iniesta-Cesc played in same position, Xavi & Busquets were there...nobody made deep runs and they had very little penetration. This heat map is from the Milan game last year at San Siro where Barca lost 0-2

In comparion yesterday's heat map shows that there is a clear 4-3-3 patters and have vertical lines. Messi doesn't drop so deep, Xavi-Cesc combined in final third, Alexis and Pedro were involved and didn't hug the touchline... 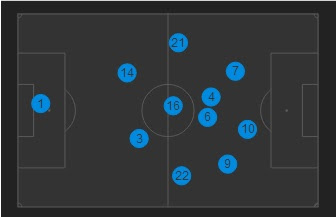 
4) Rotation.
Bear in mind that the season starts in August with pre season and ends in July with the World Cup and then starts again. The key Barcelona players played a ridiculous amount of games in last 5-6 years with both club and with the national team and it really is taking it's toll on certain players like Xavi, Messi etc. What Martino needs to do here is to have a bigger squad. Guardiola always loved to have a small squad, just to keep everybody happy and hungry but in the long term it is really having it's total impact now when they have played 60+ per season. Martino needs to rest key players for key games, like Xavi, Iniesta, Alves and even Messi.  He needs to find a perfect harmony between the players and the team. It was the first game of the season and he wanted to make a good start. OK that's fine. But he left the likes of Montoya and S ergi Roberto out of the match squad. They are the key squad players who need to give a much needed rest to Alves, Xavi etc this season. Martino made 3 changes yesterday and he took off all 3 striers and gave minutes to all his strikers - Messi, Pedro, Alexis (Neymar, Tello) He needs to keep them fresh throughout the season but also the same with Xavi and others. Xavi didn't rest a single minute yesterday which is a worrying sign. Hopefully he will use Xavi in big games and give him a rest. Xavi can still deliver in big games and have an impact but he needs a rest. Two of his best games in this year has been vs Milan at home and Uruguay. Why? Because he was fresh and not tired.

5) Man Marking in corners.
This is the most obvious thing he will change about Barcelona. He has always used man marking in corners and he will use it in Barca too, although with some kind of a mix between zonal and man marking.
Yesterday Levante had only one corner the whole game, but that was enough to see how Barcelona will line up in corners. 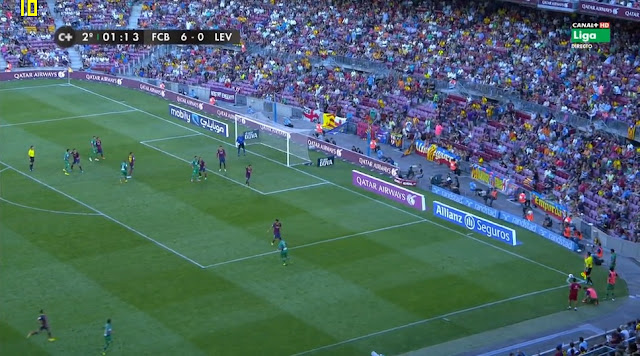 Tata used Pique and the only 'free' defender. He is the only one who defense a zone, right in the middle of the 6 yard box, to clear the ball where it will be aimed most probably. Then he has Xavi covering the first post area to clear any weak corner kicks, that's a very important job because surprisingly so man corners are wasted these days. Then you have 4 players who will man mark. In this case they are Alves-Adriano-Busquets and Macherano. Only one of them - Busquets has real height, others are quite small and weak in the air, which makes the man marking very dangerous, especially when they start to use blocks to fight off from their markers and make switches. What surpises me the most is that he didn't use Cesc ahead of either Adriano or Alves. I think Cesc is quite good in the air compared to those two full backs. Cesc made sure that they Levante didn't have a short corner.
To get a clearer picture of his transition from zonal marking to man marking we will probably have to wait a little more, when Barca will face real tests along the way, Joaquin Caparros is know for is cowardly tactics and his Levante side did look pathetic, although Barca made them look very weak as well.

Barcelona all 7 goals with build ups