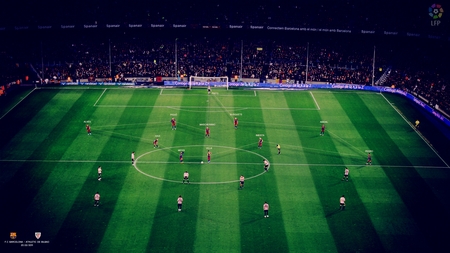 Barcelona struggled yesterday in the first half to break through the solid Atletico Madrid defense with their arguably best line up and most used formation. It was almost the same line up as in Munich besides Mascherano, who I think was by far Barcelona's best player on the pitch. They had 0 shots on goal in first half and created very little.

In the build up to this goal they changed their formation during the play. They started from the back when Valdes played the shorts goal kick to Mascherano. The team was lined up in their classic 4-3-3, Cesc Fabregas replaced the injured Messi and played as a false 9. Atletico Madrid didn't press high up the field like they did in the first half when they denied Valdes to play from the back. They dropped very deep right away and allowed Barcelona to come to the half way line. What Barca did was that they formed a back 3 of Alba-Macherano-Pique and moved Alexis from right winger to play centrally. Barca started to circulate the ball on the left wing and that created space for Alves on the right flank. When Xavi played the ball to Alves, Alexis and Cesc already were in the box and Neymar made a deep run from the flank inside and finished off the move. In the end they had 3 players in the box, something that Barca have lost recently, to put players in the box. That movement allows Alves to own the flanks and move Alexis and Cesc in the middle and Xavi-Iniesta to act as playmakers.