We already know that Tata Martino has turned zonal marking into man marking in corners. Now that a first team have really tested Barcelona in corners, Valencia had 5 corner kicks during the game, let's go deep into this and analyze all the 5 corners.

Valencia had 5 corners and they put all of them into the box, didn't play a single one short. They put 3 players in the box in the first corner (Postiga, Michel and Costa) and 4 players in the next 4 corners, as Rami the CB joined. Barcelona man marked those 4 players, Iniesta covered the near post, Alba covered the 16 yard area for 2nd balls and Pique was given a 'free role' in the hearth of defense.

Few points:
1) Iniesta covering the near post to cut out the bad crosses
2) Valencia attacking the near post or the far post
3) Pique covering the central zone, but Valencia put crosses beyond him, Pique didn't head the ball a single time in those 5 corners.
4) Alves man marks Postiga
5) 4v4 situation in the box where Barcelona players had to man mark Valencia players
6) Mascherano getting beaten easily in the air 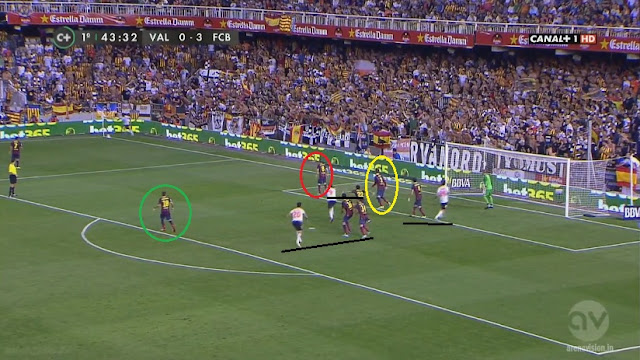 In the first corner Valencia sent 3 only 3 players in the box, a CB Costa, a Midfielder Michel and a striker Postiga. Alba, (green) covers the 16 yard area, Iniesta (red) covers the near post and Pique (yellow) is right in the middle, not covering anybody, but and covers the central zone. As for man marking I don't know who's idea was this exactly but it's something like this

(Later Busquets takes Rami and Mascherano Costa)
Barcelona put Alves to cover Valencia's most dangerous man. And it wasn't just one time mistake or miscommunication or something. Alves man marked Postiga in all 5 corners. So it leaves me just to think why the coaching staff put Alves, who is not very good in the air, to mark Postiga.
Another point worth pointing out is that Cesc had to mark Michel but lost his marker easily and preferred to play zone and cleared the ball. But if Costa or Postiga could've flicked the ball just enough it would've bounced to Michel at the far post who was unmarked and it would've been an easy finish for him. 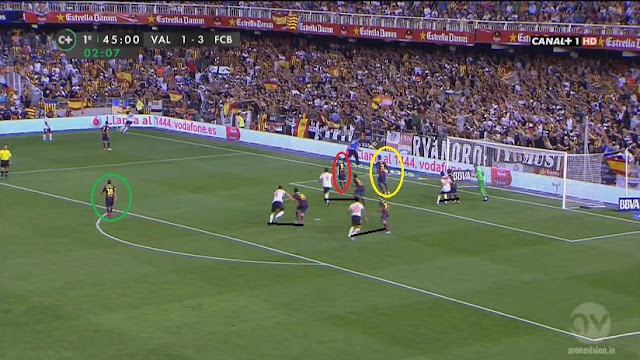 Barcelona conceded another corner just before the half time. This time Valencia brought another CB - Rami. It was Busquets who now marked him. It's 4v4 and Iniesta & Pique played zonal.
Cesc-Michel
Alves-Postiga (scored)
Busquets-Rami
Mascherano-Costa
Banega tried to put the ball in the near post earlier and now attacked the near post again because Pique didn't cover that area, it was Iniesta and Alves and Postiga had no problem outjump those two and scored pretty easily. 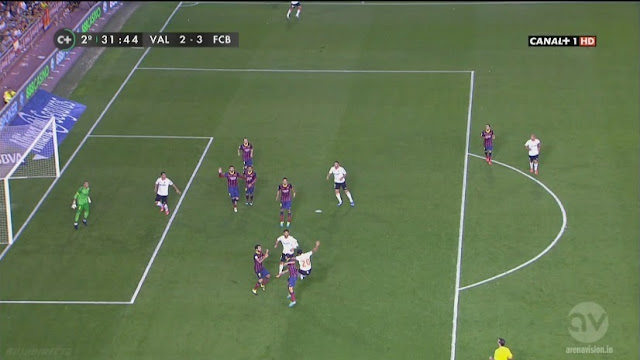 "Yeah, but why don't they put men in the corners?" I can still hear that line quite often. Although Tata
Martino dropped zonal marking and went for man marking, he didn't (luckily) put men in the corners. And this is the main reason why there shouldn't be any. Now Imagine there are two men covering the posts, or even one, that would automatically mean that Postiga would be onside there. It is basically a 'restricted area' that the Barcelona players create. Also in case Valdes would save the shots/come off the post etc the players in that 'restricted area' can't play the ball because they are in an offside position The other thing is Valdes has a free zone in front of him which you can see in part 5. 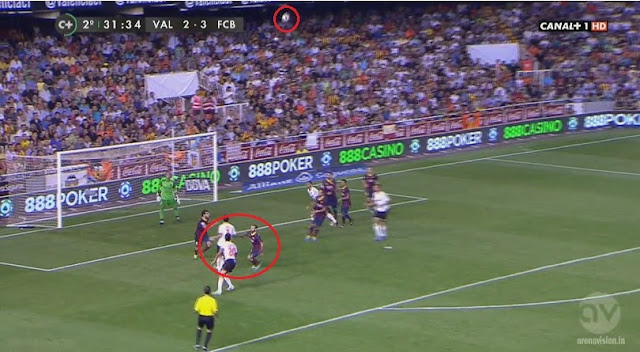 Another thing worth mentioning when you are man marking in corners is that you can easily lose your marker. It happened with Mascherano, twice.  Watch closely how Costa lost Mascherano with quick movement and he was already behind. While Costa had a clear view on the ball, Mascherano had already lost his bearings and only focused on Costa, he had no idea where the ball was. With zonal marking (which Valencia did this game) they would only focus on the ball and their area. This would not have happened. 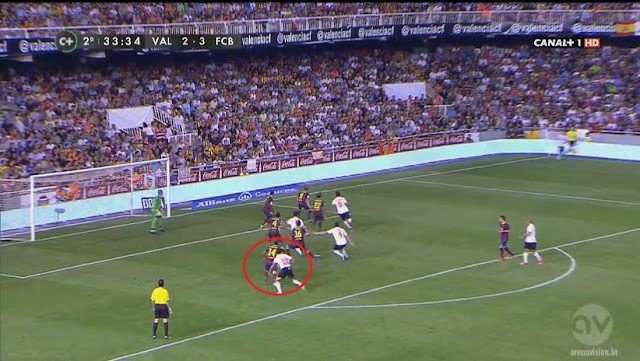 One of the main reasons why Tata Martino prefers man marking over zonal marking is that he has that idea that at zonal marking the opponent can come at you and outjump you while you are standing still, it's easier that was. It clearly has a point in it, but if we look at this corner, Mascherano still gets beaten in the air by Costa who made a run from 16 yeard box to near the 6 yard box which gave him the momentum to beat Mascherano in the air. And because they both run towards the goal, Costa has a huge advantage over Masche because he is face towards the goal, Masche is too be it's harder for him t clear the ball and he doesn't know exactly where Costa is, while Costa has his bearings and can head the ball much better with that angle than Mascherano can. 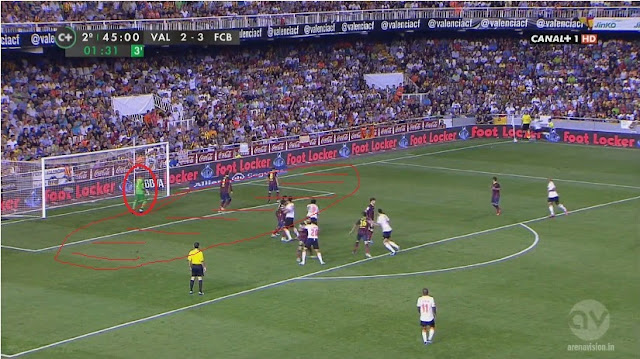 Since Barca doesn't have any players covering the posts and the players come from deep, it means the whole 6 yard box and even more is Valdes's area, he has nobody there to interfere him and he can clear the ball easily. Also there is no point to put an attacker in front of him because he would be useless there because he'd be in an offside position and can't play the ball. 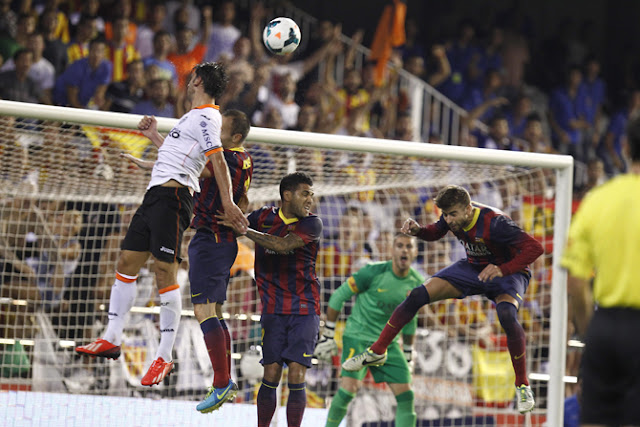