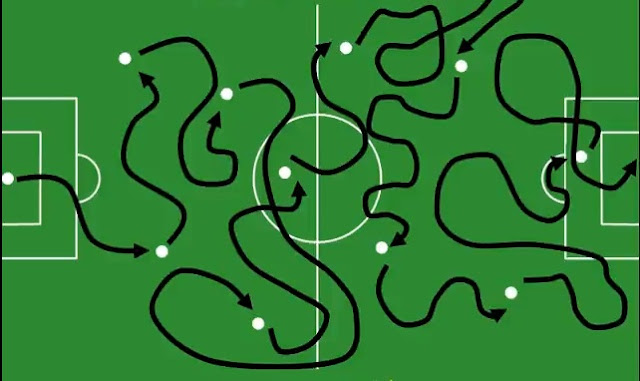 This is the first game after Champions League first knockout game with AC Milan where Barcelona played very badly, were tired, didn't have any fresh ideas. They lost 2-0 away, but the worst thing was they were actually never in charge in this game, never was I thinking that they could turn this around. But good thing is that even one of the greatest club in history has the ability to learn from their own mistakes and make corrections. Although Tito Vilanova is not there, he is in New York reciving treatment,  he still helps his team via telephone. Against Sevilla they had problems, but they found solutions for the them, made corrections and turned the game around. This is a good sign for the return leg at Camp Nou against AC Milan to turn things around. Like Xavi said that the team 'owes a great comeback for the fans' The great Camp Nou crowd, who cheered them when Torres scored in dying minutes last season and Barca were kicked out by them.

Barcelona started the game with their classic plan A that they'be basicly had since Pep moved Messi into false 9 role in the historic 2-6 El Classic. Although there was some slight changes like Montoya were playing left back, Song replaced Busquets, Villa was back...But the dynamics didn't change. It was still the classic 4-3-3 with Messi as false 9 and the two wingers - Villa & Alexis were playing pretty wide, to stretch the backline for Messi.

Barcelona lost the first half 0-1 and made changes right after half time. They took off Alexis who had a minor injury and replaced him with Tello. This changed the whole dynamics of their formation. Tello went to Left Winger, Villa moved into middle to play as w true #9, which left the right flank, where Alexis played in frist half, completely empty for Dani Alves who had a lot of freedom to run up and down the flank there. Defensivly Thiago-Song-Pique covered him, but it was still risky at times. But the risk totally worked out. They scored 2 goals in first 15 minutes  thanks to Villa and Messi. First goal cam simply because finally Dani Alves had somebody to cross the ball into box and second goal because Villa's present into the box occupied couple of defenders to drag away from Messi to score.

Plan C was to move Villa back to the wing because Barcelona suffered a bit defensivly because Sevilla attacked the right side. Both Tello and VIlla covered their flanks and made a lot of work defensivly. Messi stayed up front in case to hold off the ball when needed and cut the passing lines to defenders.


4) Plan D
Final 15 minutes Barcelona did something they had never done before this season. They played both Song & Busquets together, with Busquets replacing Villa. Don't panic, it was not double pivot. Busquets didn't play in the same line with Song, he played a bit further and a bit towards to the right side so he can cover Alves as he could still make his runs forward there so Thiago could drift inside to add more numbers in midfield. It was a great move by Tito/Roura because it added more defensive solidarity for the team. I could only imagine that they start to use both Busquets & Song more often on the pitch, probably not starting both two, but definately at the end of matches.


Conclusion.
This Barcelona team shows that they can make comebacks, it was their 9th time this season that cam back from being a goal down. Most of the times its because they have made some intelligent changes. Only a very very intelligent team can make 4 changes with their formations during a game. Every single player need to know the game very well and since most of them have raised in La Masia and played together so many years, they can pull this off. Barcelona also won against Sevilla in away earlier this season when they made 3-4 changes during the game and won 2-3 thanks to David Villa's late goal. At the end they played Tello-Villa-Pedro front line with Messi supporting them. Barcelona have a fantastic plan A which bring them 14 titles in 4 years. But they show that they can also mix up their game and make 3-4 moves during the game.