Dani Alves has recived a lot of (unfair) criticism defensivly this season with his positioning. It's been said that too often he goes to cover and help his center backs and leave his man unmark down the flank. Like the goals vs Granada & AC Milan recently. So is he right doing this or not? For me what he does is clearly right, it's football ABC, but lets analyse these situations.

First of all, I want you too check this video.


This is the basics and footballs ABC.
You can see the basics there how the back 4 or back 3 needs to move collectivly and how close the need to be each other to make it compact. Full backs can't go too far from CB's to mark the wingers because it would leave too big gaps between them to exploit. Only when the ball goes to winger, the full back quickly need to go and mark him, not vice versa, that he first covers the winger and leave the distance between CB's too big.


As you can see here how Everton conceded because the gap between full back and CB was too big and thus couldn't help the defense to cover and they conceded the first goal because of that. This once again proves that defense need to be compact. Football is the game of spaces - finding them and cover them.


Now lets get to the Milan's second goal where people said it was Dani's fault and his positioning was bad. Lets see the goal first.


Milan did a great pressure to win the ball back from Barca's throw in, that were it all started. Because Alba took the throw in, he was out of the play and Barca had 3 defender in line, Puyol, Pique and Alves and the had 2 players to cover, Puyol took Niang, Pique sweeped and Alves had El Shaarawy. Everything is right at the moment. The problem is that the goalscorer was Muntari who made a deep run from midfield and nobody covered him. 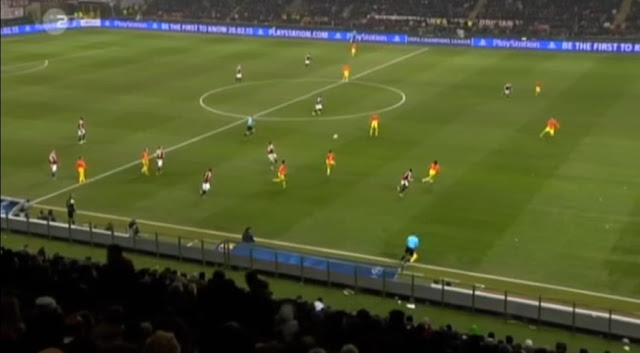 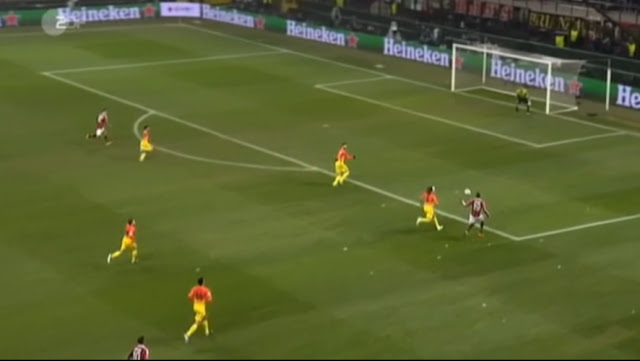 goal granada by allasfcb It all started when Barcelona missed from the other side and Granada build a quick counter attack down the Barca's left flank.

What Barcelona could've done here is that Busquets had to be between Pique and Alves. First to close the gap between then and second to cover Torje, then Alves would've had Nolito, who was his pririty, but then later had to come inside to cover Torje. Then Alves would've probably prevent the goal, at least the free cross inside. Once again, it's really easy to blame Dani Alves firstly in these situations but in a longer look you can clearly see what he does and thinks there. And he does everything right. Just the support from midfield has been poor. (Xavi in Muntari's goal and Busquets in Ighalo's goal) 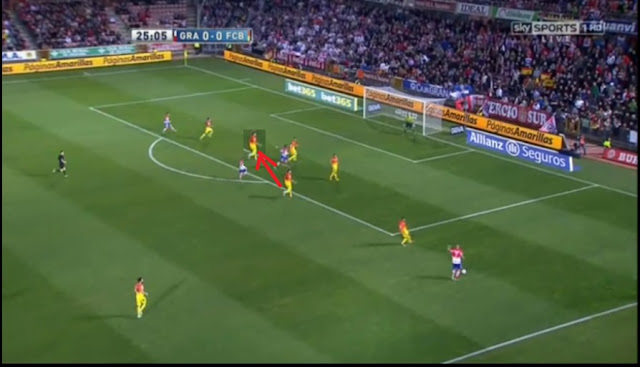 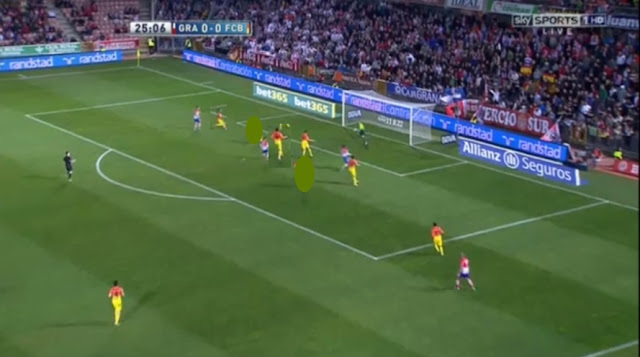 I'm gonna show you now the other side of the coin. The last minute of Granada's game when Barcelona were an immense pressure and had to defend very deep. This shows you how important for a full back is to be close to CB, make defence compact and leave the space open.

Have a close look on Alves in these last minutes. When the ball is on the other side, he always come deep to help CB's. He leaves the wide man and when Granada plays the ball to him, this is when Alves makes a run towards him to close him down. He prevents 3 goalscoring opportunites with his movemtns, to close the gap between CB's and leave in open in the flanks. If he would've gone to cover the wide man in the last attack, Granada would've scored there, but he did the right thing and stayed inside there, he read the game so well and saved his team in these last minutes. I don't quite know why people don't rate him as a defender, he is a top class defender who can defend in every third of the pitch, something that only a handful of defenders can do in the world.