Why is Alexis so important for Barcelona? 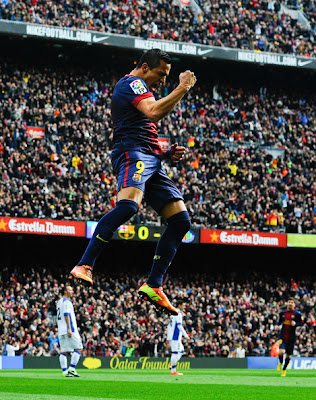 First of all I want to say that I'm very disappointed with my fellow cules in recent months. I know that most of them have jumped in the glory bandwagon in recent years with all the success and because of Messi, but still. I personally think that the best team needs the best fans as well. The amount of (unfair) criticism that Alexis has recived makes me just very very angry. Take yourself together and act like Pep Guardiola have taught you in recent years.

Now lets get to the point. I've been one of those few who had an eye on Alexis before he came to Barca. He impressed me in the World Cup 2010 with the most attractive side of the tournament, led by Marcelo Bielsa. He was one of the standout players of this tournament although he really never got the attantion. He was a pacy winger with good trickery, but as well very intelligent with his movements and always a fantastic workrate. So I started to follow him at Udinese, the 2010/11 season I watched almost every single game and if you'd remember I even made video compilations of him, his performances against other teams. He had of course a different role at Udinese, he played as SS, behind Di Natale, he had a lot of freedom there, often combining with his fellow national teammate Mauricio Isla down the right flank as well. Around January, Barcelona started to show interest on him and sent scouts to follow him. He was exactly the kind of player Barcelona were looking for. At the end of the season, he helped Udinese to the Champions League spot and was voted as 'Best player in Serie A 2010/11 season'


It wasn't time for him to settle in, he was thrown right into the biggest clash in todays football - El Clasico. He played his first game at the Bernabeu vs Real Madrid. His first touch in Barca's shirt was when he tracked back to took the ball from Cristiano's feet and make a backheel pass to Thiago. He terrorized Marcelo down the right flank, often left him dead with his pace and trickery. Everybody started to love him. He shared his place and minutes with Pedro & Villa, but his strong performances before the league Clasico in December earned him a starting XI place in the squad for this game. People tend to forget that he earned his place in this game over Pedro & Villa who were both full fit to play!!! Alexis played as a true number #9 this game, just ahead of Messi. It was him who scored the vital first comeback goal, after Valdes' mistake in the first minute. With his intelligent movements and workrate, he also earned his spot from the Spanish Cup games couple of weeks later when Barcelona advanced to Copa Del Rey semi-final. Everybody fell in love with Alexis, remember those days? He scored 15 goals this season and was Barca's 2nd best goalscorer behind Messi and Barca's main attacking players as well behind Leo. Guardiola was so fond with him that he even said after those games with Real Madrid that Alexis 'stole his heart'.

1)
Now lets get to the point why he is so useful for the team. Lets start with his perhaps best attribute in my opinion. His diagonal runs that creates space for his teammates. Why is this so important? Well, they are basicly assists that won't go to the stats.
Real Betis 1 Barcelona 2
The game that went down as a historic game for Messi, because he broke that Muller record of most goals scored in a single season. Alexis was on the bench but came on after 10th minute for injured Cesc.
If you look at those goals, the first one, when Messi recives the ball from Iniesta, Alexis makes a diagonal run inside with only the purpose to drag a player away, just to create that extra space for Messi to run into and score this goal. Like Axel Torres said, it was bascily an assist. He also made a contribution to the second goal, with the same diagonal run to drag his defender away to create that space down the right flank.
There are many other example where he have created a goal with his runs like this or this.

His movements to create space for himself, his runs behind the defence and diagonal runs. One of the best attributes that a player could have. To make himself available on the pitch and not hiding himself behind defender for just the sake of being afraid. Xavi said: “Alexis gives us great depth. For a midfielder like me it is a privilege to have someone who has the ability to leave his markers behind like he does.”
You can't argue with Xavi, that's a fact!
The thing with these runs is that when you make them you are useful for the team so many ways. a) to create a mess with the defensive lineup b) to give midfielder an  extra option c) even when you won't recive the pass, your job is done, because you dragged away a defender for other player.

3)
His defensive work. One of the main reasons why Barcelona started to scout Alexis and start to attract their attention was that he can run without the ball and help his team with defensive duties, something thats vital for this Barcelona side, especially since 2010/11 season.  When they start to play Messi regularry as a false 9 and the wingers had to track back from their flanks a lot. Alexis can provide that. And it's not only tracking back, it's also putting pressure on defenders and having strikers as first line of defence. If you are still wondering, watch the last 90 minutes of Granada vs Barcelona (1-2) when Barca took off Alexis and Pedro. and replaced them with lesser defensive work Iniesta and Tello. Barcelona struggled and defended near their own box, something they didn't have in the first 80 minutes because the strikers had the legs to put constant pressure, high up the pitch, to the defender and thus get the ball back very soon. Barcelona have been so innovative and changing the concepts of the game. They struggle defensivly when you take off their 2 strikers and struggle offensivly when you take off Pique, who can build from the back so well.

4)
Now is the moment to hear the "Bbbb...Buu...But he doesn't score goals does he? Thats the main job of the striker isn't it?

Well is it really? If you guys remember, Spain won the Euro Cup in 2012 basicly without striker and produced one of the greatest finals with 6 midfielders. Did they need a striker so bad to score goals? NO! David Silva, who is barely 170cm, scored a header, Jordi Alba who is even more shorter and a defender scored.

Theres´s a good saying: "We are attackers who defend, we are defenders who attack!"
It describes Barcelona so well. It's Total Football, everybody must be comfortable in every position, every situation. Barcelona is not the club where you have a tall figure up front, poking goals for fun.

Alexis have showed that he could be so useful for the team on so many ways. Lets take the Getafe game.

This shows you why Alexis is so important for this team. His constant moving helps his team. He created so many chances by just making runs. He is every midfielders dream. With his movements he makes his team better. But also creates chances for himself, like for example his goal or the run just before that. Or the last play, where he moved inside to leave the flank open for Dani, then made a quick run towards him, defender went the same way, but then quickly changed his direction and Alves released his this ball and he was completely empty for the header, leaving defender for dead.


There's not a single doubt that he is lacking some confidence this season in front of goal and taking players 1v1. He said in September that he'd give himself 5 out of 10 so far, which means he is critical about himself. This is very important, he knows he can do better and he gives everything to do his best. But even when he struggles to get to the scoresheet, he is still a very very important player for this team. I would compare it to Messi when he at times struggles to get his into his usual rythm, like this year against Atletico Madrid which Barcelona won 4-1, where Leo wasn't very good but still managed to score late goals. Alexis struggles to score perhaps at the moment, but the can make runs to open up to Messi to score 2 goals, like against Real Betis.
Confidence only comes back when you give some time and don't jump down his throat every single opportunity. And with confidence comes back his goals, because we all know he CAN score. Otherwise he wouldn't score 15 goals in his first season even with all those injuries and 4 goals in 48 minutes. SO be positive, love Alexis and be proud that you can see with your own eyes one of the best team in history!
Postitaja: allasFCB kell Sunday, February 17, 2013