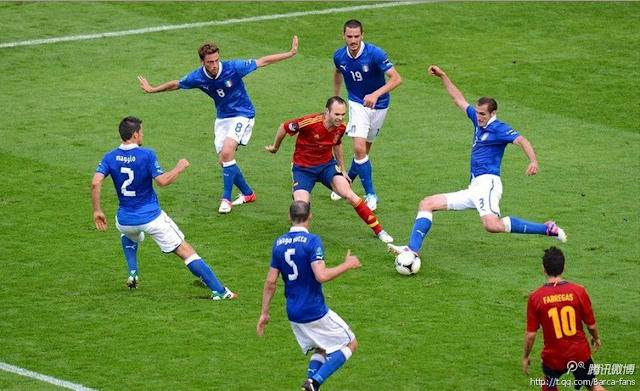 He is short, he is weak, he doesn't have a powerful shot, he's got a weak left foot, never scored a header (never even head the ball?), never scored a free kick, doesn't score much....Could this be one of the greatest players of this game? Absolutely yes! If his name is Andres Iniesta.


Iniesta was born in Fuentealbilla, a small village in the middle of nowhere, about 500km from Camp Nou. When he went to Barcelona, at the age of 12, he described La Masia as "hell". 500km from your family, friends, home at such young age is very difficult to deal with. Almost every night he had to cry himself to sleep, because it was so hard to him. He thought he'd never make it, but you have to be strong. Even at the age of 12 you think: "I have to fight. I've come this far, there's no going back!" The greatest thing that kept his going was that when he woke up, the first thing he could see from his window was Camp Nou, barely 100 meters from it. Where his childhood heroes were playing, Guardiola one of them.

Clock is running down and time is slipping away, yet another attack - a tiny, pale midfielder waiting on the edge of the area to make history. Ball is pulled back, no room to control, no time to think. An instant, instinctive shot and it's in the back of the net. 'Goal' is everybody screaming, hands in the sky, sprininting to the touchline and all of sudden he is buried under a pile of bodies.

You know this story right? But this is not Chelsea 2009, not even World Cup winning goal. It's way way earlier. It's 21 July, 1999 at the Camp Nou, Nike Premier Cup final the under 15 Club World Cup. Iniesta, 14 years old, being captain and player of the tournament, had just scored an Extra Time winning goal in the final against Rosario Central. The man who who gave him the trophy was his childhood hero, Pep Guardiola. He shook his hand and whispered: "In a few years' time, I'll be watching you do the same from the stands."

On the day Iniesta was called to train with the first-team squad, he could not find the dressing room. Luis Enrique was sent out to find him. Wide-eyed, the 16-year-old thought it was a joke, yet Guardiola was deadly serious when he told team-mates: "Remember this day – the day you first played with Andrés." Pulling Xavi Hernández aside he said: "You're going to retire me. This lad is going to retire us all."

An injury to fellow midfielder Xavi at the start of the 2005–06 season allowed Iniesta more regular starts in the centre of midfield, and he continued to improve and develop. He played in 11 Champions league games this season and he was very good. Frank Rijkaard, who was the coach then said: "I played him as a false winger, central midfielder, deep midfielder and just behind the striker and he was always excellent."
But when Barcelona reached to the final, Rijkaard decided to play Edmilson over Iniesta. After he said he was gutted by this, because he had such a great season. At half time, Barcelona was a goal down, but a man up, after Jens Lehman's sent off. Rijkaard decided to bring him on right after half time ahead of Edmilson. He wanted him to take the game under control, playing just ahead of the back four, to circulate the ball and start the attacks. Thats exactly what he did, he changed the game. In the game that had such names as Henry, Fabregas, Eto'o, Deco and the best player of this time, Ronaldinho, a 22 year old Iniesta was the (quiet) star of the show.


In 2008 summer, Spain went to Euro's once again Big favourites, but last time they won the tournament was in 1964 when they beat Soviet Union. They had the mark on them as being the team who tend to play very good football, but always failed to win. This time it was different. They were cruising down the group stage as they always did, but n the big games, they showed up, especially iniesta. It was their time to shine. They played wonderful football but also they were decisive. Iniesta turned up in the semi final against Russia, one of the best sides of this tournament, that everybody were scared of. Iniesta was named MOTM this game and lead Spain with 3-0 victory to the final against Germany, which they won 1-0. They were no longer the underperformers in big competitions and everybody started to make the seriously. This was the beginning of one of the greatest National sides ever, lead by Iniesta and Xavi who are still the main force of this team.


After being succesful with national team, his boyhood hero, Pep Guardiola was announced as the manager of FC Barcelona, summer 2008. It was the beginning of a new era. It was a historic year for Barcelona because for the first time they won the treble (Copa, League & Champions League). Game after game they were trashing their opponents. 2-6 at the Bernabeu, 4-0 vs Sevilla, 4-0 vs Bayern, 5-2 vs Lyon...the list could go on and on. But maybe we wouldn't talk here about it if it wasn't down one moment of magic. One second that maybe changed the history of this club, one moment that changed the history of Iniesta. One of the greatest moments in Barcelona's history. Yes! It's THAT moment. 93rd minute at Stamford Bringe. Many could say that this was the best moment in their lives, including me. He stepped up and lead Barcelona to the Champions League final and to treble as well to sextuple (Uefa Supercup, Spanish Supercup, Club World Cup) in one season. But just after the game with Chelsea, Iniesta got injured against Villarreal, just 17 days before the final.  Iniesta says. "I got injured 17 days before the final and all I wanted was to be there, however big the tear was. It was a 3cm tear and I fought morning and night. I had played in Paris [against Arsenal in 2006] but only as a sub so it left a bitter-sweet feeling and I kept thinking about that. In Rome I had to play. By playing despite being 'broken' I struggled at the start of the following season. I played a big price. But it was worth it."
He was perhaps 60% fit, doctors said to him not to shoot to hurt himself. Now think, you have a player who didn't play in 3 weeks before the final, he is 1.70 m (5 ft 7 in) and weights around 65kg. He is weak, short, and now he can't even shoot! He is like the anti midfielder every time wants to their side. BUT that didn't allow him to run the show against bigger and fitter opponents. After the final Wayne Rooney bowed him as the 'best player' Alex Ferguson said: "I'm not obsessed with Messi, Iniesta is the danger. He's fantastic. He makes the team work. The way he finds passes, his movement and ability to create space is incredible. He's so important for Barcelona."

This is the beginning of one of the best teams in history of club football, once again, lead by Andres Iniesta.

The Champions League Final came with a price. He played with an injury and thus he was really struggling the next year, always fighting with injuries. Many would say he was the reason why Barcelona were knocked out against Inter that year. He was missing in those games, perhaphs he was the missing key. But when the summer came, he wanted to repeat the same success with Spain, when they won Euro 2008. Spain had never won World Cup before, they didn't even reach to final, not even semi final in their entire history. This was their moment. But after a 1-0 loss to Switzerland and Iniesta's injury in that game, everything went down again and no teambefore had won the World Cup after losing the opening match. Spain won against Honduras 2-0 and in the last game vs Chile it was do or die for Spain. They had to win. Iniesta was cleared fit to play. He scored the winning goal, named Man of the Match and helped his team to advance from group stage. Iniesta was by far the best player in his team and collected two more MOTM awards, including the final, where he was the one who scored the winnig goal in extra time. Just like he had done before in the Nike Cup and against Chelsea. He led his country to the first ever World Cup trophy, after they have waited it for so long. Pique said:  “I think someone touched him with a magic wand so that he can score important goals.”

Everybody in Spain started to love him, he was like a God, next season he got standing ovations in every stadium he was subbed off, even including Barcelona's arch rivals, Espanyol. This had never happened before. He was once again fit and played almost the whole season. After a rather disappointing 09/10 season, Barcelona showed that people should talk about this team as one of the best teams in the world, espcially after 5-0 vs Real Madrid, one of the best team performance ever. They also beat Real Madrid in Champions League semi final and reached to the final. The final in Wembley, where his childhood hero Guardiola had won the trophy as a player. Everybody knows that it's hard to win a trophy, but it's even harder to defend it or win it again. You have to better than the last time to do that. And Barcelona, with Iniesta definately were. They produced one of the best performances in Champions League history, in Wembley, in England. This was when people started to talk Barcelona as the best team ever.

In the summer 2012, Spain went to the Euro's as main favourites. They wanted to do the impossible, to win 3 main Cups in a row, something that no team have never done before. Iniesta felt that this could be his time, finally his time to shine, finally the time when he is no longer in the shadows of bigger players. It was his time, his space, he was fit and more motivated than ever. He wanted to do the history. And oh boy he did not let us down! He was named best player of the tournament, he won 3 Man of the Match awards, he turned up when the team needed him the most, he was the best player in the final, producing one of the best perfomances that Spain have ever showed. He led Spain to 3 concecutive major Cups, something that have never done before. Once again, people started to talk Spain as the best National team ever


Now we have a player that came from a village of population not more than 2,000. He has won absolutely everything in world football, with his club and with his national team. He has led those two as the greatest teams in this generation and one of the bests in hisotry. At the same time he has done it with being elegant, graceful and beautiful to watch. And at the same time down to earth and extremely respectful towards the game, the fans, the media, the players...Maybe it's time to change our concepts about the game. In the history it has always been the strikers who get all the attention, simply because the score goals. Maybe it's time to look beyond that and to see the game in another perspective. If Andres Iniesta won't go down as one of the greatest footballers ever played this game, then it's definately something wrong in this world.
Postitaja: allasFCB kell Wednesday, February 13, 2013