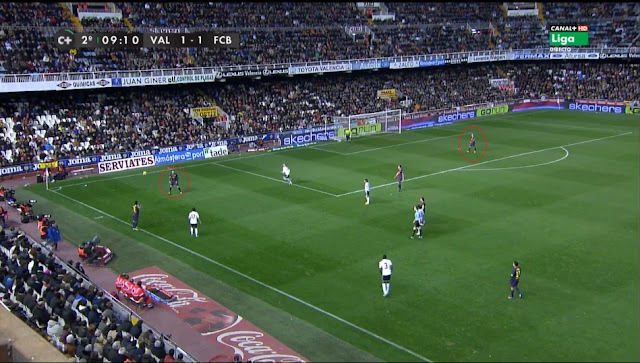 Barcelona starts with the throw in on the right flank with Dani Alves. As with any (dead ball) situatuion, Barcelona are trying to play out of trouble. Is it a corner, goal kick, quick free kick, throw in. It's risky, but they know they have the ability to do that.
First of all, I circled Pique and Mascherano here to show how far the two center backs are from each other. Why is this important? When Mascherano came to Barcelona in 10/11 season from Liverpool, he told that the best way to help your teammates was to go towards them, to be close to them. In Barcelona they told him to do exactly the opposite of it - to get away from them to always open up a line of path. This is why Barcelona play rondo every day and do exercises with the ball every training, to be comfortable with the ball even in tight situations, so you can positioning your players that far away from your teammates so with couple of passes/movements you can play the ball to the other side of the pitch and to get away from the pressure. 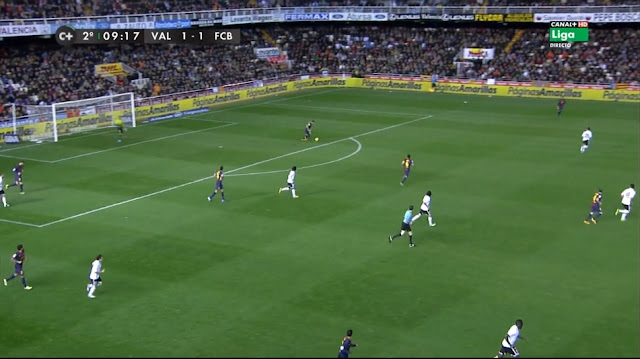 7 Seconds after you can see that the Mascherano have the ball here and they got away from under Valencia's pressure and can build up the attack now, with the pitch spread and players have more freedom because of the made the pitch 'big'. 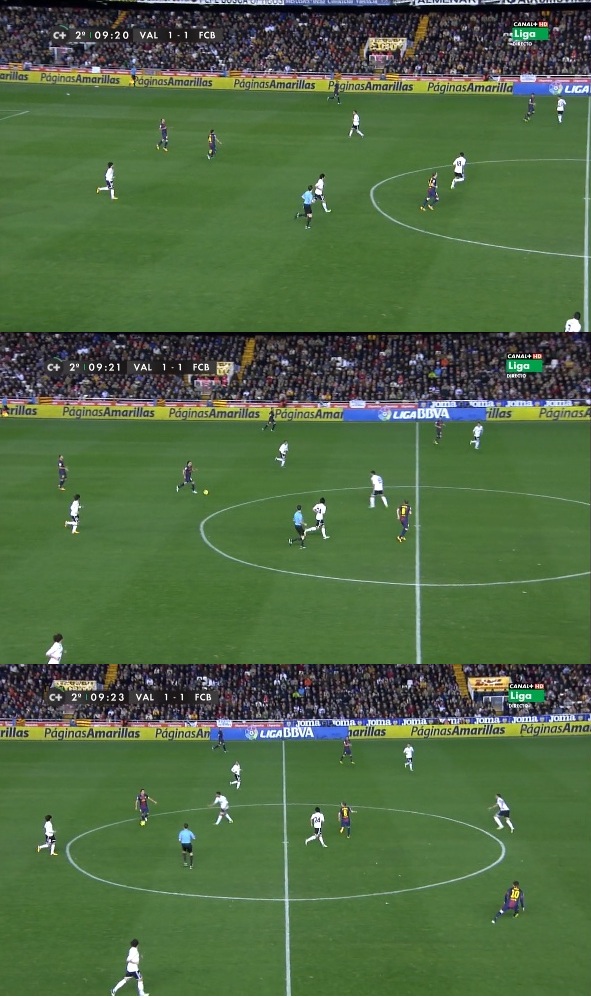 This sequence here with Iniesta shows how important is to move. Because if you move you drag away defenders. It gives Xavi, with the ball, more options. Iniesta created a path of line for Xavi to play the ball to Messi there. If you look at the 2nd and 3rd picture you can see the difference.


This sequence is only about Xavi's pass to Messi. It's just one pass but there's so much to see here


Did you see it? What Xavi and Messi did there? Lets just see this once more in acloser look.

This just shows that he is the true maestro of football. First of all what he did there is that he always had his eyes for Messi. Thats very important to have the ability to dribble with the ball with your head up and not down. Because if you have your head down you can see only whats around you in 3-4 meters. But Xavi controls everything there. One thing that most players would've done there is that they'd pass the ball for the first time Messi made his move. But Messi just made amove forward to drag off the defender, to create space for himself and Xavi sees that, because he always has his head up

This is what Ialready described earlier. Messi makes his move towards defender and then quickly changes the direction that gives him the timeand space to recive the ball. Whats very important here is that they always have the eye contact between them.

Messi recives the ball here as a false 9.He is the furthest player in Barca here,but what he does is that he comes deeper and takes one of the CB with him. Just when he gets his bearings, hemakes eyecontact with Cesc and Cesc does what he does best there. He starts to make a run behind defence.

Of course Messi spots Cesc's run and plays a perfect ball to him. Messi came deep from his position and Cesc made a deep run behind the defence.