1) Lets start with the first one. The classic 4-3-3 formation that they have used since Johan Cryuff arrived to Barca in the 70's. It's been the formation that he have used in all 4 seasons, with different players of course and maybe a little bit changing it, but the concept has reminded the same.

Here's one exaple from the FC Bayern game in the Champions League in 08/09 season, which Barcelona won 4-0. Messi played on the right wing back then, often combining with Dani Alves and cutting inside, with Eto'o up front and Henry on the left side. 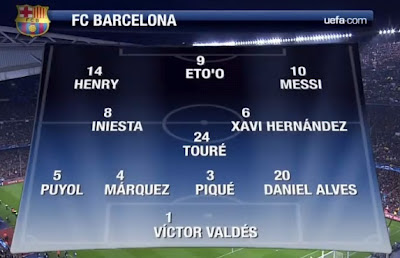